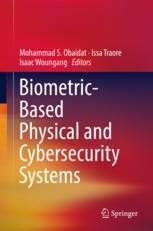 This book presents the latest developments in biometrics technologies and reports on new approaches, methods, findings, and technologies developed or being developed by the research community and the industry. The book focuses on introducing fundamental principles and concepts of key enabling technologies for biometric systems applied for both physical and cyber security. The authors disseminate recent research and developing efforts in this area, investigate related trends and challenges, and present case studies and examples such as fingerprint, face, iris, retina, keystroke dynamics, and voice applications . The authors also investigate the advances and future outcomes in research and development in biometric security systems. The book is applicable to students, instructors, researchers, industry practitioners, and related government agencies staff. Each chapter is accompanied by a set of PowerPoint slides for use by instructors.

Professor Mohammad S. Obaidat (Fellow of IEEE and Fellow of SCS) is an internationally well-known academic/researcher/scientist. He received his Ph.D. and M. S. degrees in Computer Engineering with a minor in Computer Science from The Ohio State University, Columbus, Ohio, USA. Dr. Obaidat is currently the Chair and Full Professor of Computer and Information Science at Fordham University, NY, USA. Among his previous positions are Chair of the Department of Computer Science and Director of the Graduate Program at Monmouth University, Dean of the College of Engineering at Prince Sultan University and Advisor to the President of Philadelphia University for Research, Development and Information Technology. He has received extensive research funding and has published Thirty Eight (38) books and over Six Hundreds (600) refereed technical articles in scholarly international journals and proceedings of international conferences, and currently working on three more books. Mohammad is the Editor-in-Chief of the Wiley International Journal of Communication Systems, the FTRA Journal of Convergence and the KSIP Journal of Information Processing. He is also an Editor of IEEE Wireless Communications. Between 1991-2006, he served as a Technical Editor and an Area Editor of Simulation: Transactions of the Society for Modeling and Simulations (SCS) International, TSCS. He also served on the Editorial Advisory Board of  Simulation.
Professor Issa Traore has a degree in aeronautical engineering from the Ecole de l'Air Salon de Provence, France, MSc in computer engineering from the ENSAE (Ecole Nationale Superieure de l’Aeronautique et de l’Espace) - Toulouse, France and a Ph.D. in Software Engineering from Institute Nationale Polytechnique - Toulouse, France. Dr. Traore is the Co-Founder and Chief Scientist of Plurilock Security Solutions Inc. Plurilock delivers biometrics security and online fraud detection solutions to the global market. Dr. Traore is also a full Professor at the University of Victoria, Department of Electrical and Computer Engineering since 1999. He is the founder and Coordinator of the Information Security and Object Technology (ISOT) Laboratory, one of the leading institutions worldwide in research in behavioral biometrics technologies. He is the co-author of the first book on continuous authentication using biometric technologies and the first book on gait biometrics based on the ground reaction force (GRF). He has been granted two US patents on behavioral biometrics and emerging authentication technologies. He has published over 130 papers in archival journals and conferences on network security and biometrics technologies. He has supervised and graduated over in the last 15 years over 30 graduate students (Master’s and PhD), several of whom are working as faculty members in different Universities. Dr. Traore developed with his students a new behavioral biometrics technology based on mouse dynamics that can be used for both continuous authentication and static authentication. This pioneering work on mouse dynamics has opened up the door to a new field of research which has been growing steadily. In addition, Dr. Traore and his team established that cognitive factors such as short-term memory and visual-scan and detection, can be measured using a computer mouse and used to biometrically authenticate computer users. This gave rise to some new multimodal biometrics that combines three modalities, namely, mouse dynamics, short-term memory, and visual-scan and detection. Dr. Traore and his team made also significant contribution on free text analysis of keystroke dynamics biometric. A specific challenge related to continuous authentication is the need to ensure that the authentication process will be conducted passively without any active involvement of the user. Free text analysis is the only keystroke dynamics biometrics can be processed transparently and unobtrusively.
Professor Isaac Woungang received his M.Sc. & Ph.D degrees, all in Mathematics, from the University of Aix Marseille II, France, and University of South, Toulon and Var, France, in 1990 and 1994 respectively. In 1999, he received a MSc degree from INRS-Materials and Telecommunications, University of Quebec in Montreal (Quebec), Canada. From 1999 to 2002, he worked as a software engineer at Nortel Networks, Ottawa, Canada. Since 2002, he has been with Ryerson University, where he is now a Professor of Computer Science and Director of the Distributed Applications and Broadband (DABNEL) Research Lab, Ryerson University, Toronto, Canada. His current research interests include radio resource management in next generation wireless networks and network security. Dr. Woungang has published 8 books and over 100 refereed technical articles in scholarly international journals and proceedings of international conferences. He served as Associate Editor of the Computers and Electrical Engineering (Elsevier), and the International Journal of Communication Systems (Wiley). He has Guest Edited several Special Issues with various reputed journals such as IET Information Security, Computer Communications (Elsevier), Computers and Electrical Engineering (Elsevier), and Telecommunication Systems (Springer). He served as Chair of Computer Chapter, IEEE Toronto Section (2012 to 2016).