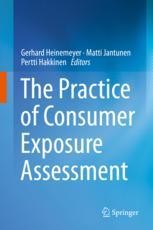 The Practice of Consumer Exposure Assessment

This book closes a current gap by providing the scientific basis for consumer exposure assessment in the context of regulatory risk assessment. Risk is defined as the likelihood of an event occurring and the severity of its effects. The margin between the dose that leads to toxic effects and the actual dose of a chemical is identified by estimating population exposure. The objective of this book is to provide an introduction into the scientific principles of consumer exposure assessment, and to describe the methods used to estimate doses of chemicals, the statistics applied and computer tools needed. This is presented through the backgrounds of the special fields in exposure analysis, such as exposure via food and by the use of consumer products, toys, clothing and other items. As a general concept, human exposure is also understood to include exposure via the environment and from the work setting. In this context, the specific features of consumer exposure are pointed out and put into the context of regulation, in particular food safety, chemicals safety (REACh) and consumer product safety.

Gerhard Heinemeyer (MD) is a clinical pharmacologist and toxicologist. He has been worked for many years in the field of exposure assessment, as the head of the unit “exposure assessment and exposure standardisation” in the Federal Institute for Risk Assessment in Berlin (Germany). In 2014, he retired from that position. He took part as an expert in numerous international expert groups at WHO, OECD, EFSA and the European Commission, in particularly the EFSA CONTAM panel, the REACh Implementation Project 3.2 (chemical safety report) as he joined the PERFOOD Project in the 7th EU Framework program. His work at BfR comprised all aspects of consumer exposure, particularly food exposure, exposures via use of consumer products and exposure in the context of the REACh regulation. Under his lead, BfR started the national food consumption survey for children (KIESEL Study) and the first national German total diet study. He also inaugurated a pilot study that evaluated consumer behaviour. His work is complemented by his activities the WHO working group for uncertainty analysis, exposure modeling and combined exposures. He has contributed a chapter on "Expositions szenarios" for the Springerreference "Regulatory Toxicology" by Reichl/Schwenk, ISBN 978-3-642-35373-4

Dr. Matti Jantunen is an environmental engineer and environmental risk analyst. In 2011 he retired from the position of research professor after 26 years of service at the National Institute for Health and Welfare (THL), Department of Environmental Health, in Kuopio, Finland. His work has involved all aspects of air pollution from indoor air to global climate change, interrupted only by the Chernobyl accident fallout for four years. For the past 25 years he has worked mostly on exposure, risk and policy impact assessment. From 1989 to 1995 he coordinated the EU Air Pollution Epidemiology Programme and since then several EU wide research projects, most importantly EXPOLIS, which laid the foundations for European air pollution exposure research. From 1999 to 2001 he organised the exposure research at the EU Joint Research Centre in Ispra, Italy. He has been a member of dozens on WHO and EU Expert Committees and Working Groups and the BfR Expert Committee “Expositionsschätzung und Expositionsstandardisierung”. He has published 130 peer reviewed and about 400 other scientific publications with over 300 coauthors from 23 countries. He is founding member of ISIAQ and ISES, and member of AWMA, AAAS and Sigma Xi.

Dr. Pertti (Bert) Hakkinen has been the Senior Toxicologist and the Toxicology & Environmental Health Science Advisor in the Division of Specialized Information Services of the National Institutes of Health’s National Library of Medicine since 2008. His job includes providing leadership in the development of new resources in exposure science, toxicology, risk assessment, and risk communication, and enhancements to existing resources in these fields. In addition, he is the project leader for the Chemical Hazards Emergency Medical Management (CHEMM) tool and the ToxTutor educational resource. Further, he is an Adjunct Associate Professor in Preventive Medicine & Biometrics in the F. Edward Hébert School of Medicine at the Uniformed Services University of the Health Sciences (USU) in Bethesda and a co-leader of the Environmental Health Sciences graduate level course offered by the Foundation for Advanced Education in the Sciences (FAES) at the NIH. Dr. Hakkinen earned a B.A. in Biochemistry and Molecular Biology from the University of California, Santa Barbara, and received a Ph.D. in Comparative Pharmacology and Toxicology from the University of California, San Francisco. His post-doctoral investigatorship was in the Biology Division at the Oak Ridge National Laboratory. Some of his affiliations before joining the NIH include the Procter & Gamble Company (USA and Japan) and the European Commission’s Joint Research Centre, Physical and Chemical Exposure Unit (Italy). He is a member of the Society of Toxicology, a Councilor of the International Society of Exposure Science, and a Fellow of the Society for Risk Analysis. He has co-edited several books and has written numerous book chapters and scientific journal articles. Recent publications include a) Exploring Global Exposure Factors Resources for Use in Consumer Exposure Assessments and b) New Studies About Everyday Types of Chemical Exposures: What Readers Should Consider.