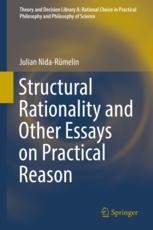 Structural Rationality and Other Essays on Practical Reason

The approach is radical: It transcends the reductive narrowness of instrumental rationality without denying its practical impact. Actions do exist that are outlined in accordance to utility maximizing or even self-interest maximizing. Yet, not all actions are to be understood in these terms. Actions oriented around social roles, for example, cannot count as irrational only because there is no known underlying maximizing heuristic.

The concept of bounded rationality tries to embed instrumental rationality into a form of life to highlight limits of our cognitive capabilities and selective perceptions. However, the agent is still left within the realm of cost-benefit-reasoning. The idea of social preferences or meta-preferences cannot encompass the plurality of human actions. According to the author they ignore the plurality of reasons that drive agency. Hence, they coerce agency in fitting into a theory that undermines humanity. His theory of structural rationality acknowledges lifeworld patterns of interaction and meaning.

Julian Nida-Rümelin is a professor of philosophy and political theory at the Ludwig-Maximlians-University in Munich, Germany. He studied philosophy, physics, mathematics, and political sciences. After his Ph.D in philosophy and his habilitation, he taught philosophy, ethics and political theory at different universities: state university of Minnesota (1991), University of Tübingen (1991-1993), University of Göttingen (1993-2003), Humboldt University Berlin (2001-) and University of Munich (2004-). Nida-Rümelin was elected president of the German Association for Analytical Philosophy (GAP) 1994-1997, and President of the German Society for Philosophy (2009-2011). He is a member of several academies, among others: the academy of sciences and humanities, Berlin and the European Academy of Sciences and Arts. For five years he left academia and changed to cultural politics, serving as a state minister for culture and media in the first national government led by Chancellor Gerhard Schröder (1998-2002).