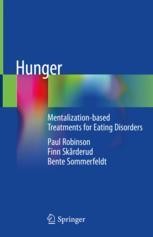 This work presents the adaptation of mentalization-based therapy for use in Eating Disorders (MBT-ED). The book starts with a presentation of the theoretical concept of mentalization and describes eating disorders from this perspective. This is followed by a discussion of the place of MBT-ED in eating disorders practice. MBT is first presented as the original model for borderline personality disorder, and then the model is further developed to address specific symptoms found in eating disorders, such as body image disturbance, restriction and purging. The original MBT model consists of outpatient treatment combined with individual and group psychotherapy, and psychoeducation in groups. The book then looks at supervision and training, and how an eating disorders team can develop a mentalizing focus. It goes on to describe the training required for practitioners to deliver individual and group MBT-ED and to supervise therapy. Lastly, it examines the implementation of the approach in different clinical settings, including inpatient services, and how management can be involved in negotiating barriers and taking advantage of enablers in the system.

The authors have conducted a pilot randomized controlled trial and qualitative research in MBT-ED and have extensive experience in providing and supervising this novel therapy. MBT-ED is one of the few therapies for eating disorders that links theory of mind, and attachment and psychodynamic therapies and as such will be of great theoretical interest to a wide variety of clinicians and researchers.

Paul Robinson is a consultant psychiatrist with experience in eating disorder for over 25 years. He is a honorary senior lecturer and senior teaching fellow at University College London as well as a researcher at St Ann’s Hospital in London. His publications including 63 papers, 3 books and 10 book chapters, are on control of food intake, provision of services for and treatment of eating disorders, Severe and Enduring Eating Disorders and medical management of severe eating disorders (MARSIPAN). He is a founder member and former chair of what is now the Eating Disorders Section of the UK Royal College of Psychiatrists and has chaired groups which have produced three RCPsych Council Reports and contributed to two others.

Finn Skårderud, MD, PhD is a Norwegian author, psychiatrist, psychotherapist and is professor at the Norwegian School of Sports, Oslo. He is also an internationally acknowledged expert in eating disorders with 35 years extensive experience. He is a co-founder and in the leadership of the Norwegian Institute for Mentalizing. He runs a private practice, and is the leading psychiatrist for The Norwegian Olympic Committee, working with elite athletes. He has produced numerous articles, essays, books and book chapters within the fields art, literature, film, psychiatry, psychology and culture, both fiction and non-fiction. In 2014 Finn Skårderud founded the Institute for Eating Disorders which in addition to its clinical and academic work, aims to be actively involved in a creative dialogue with society at large through close involvement in the arts, film, literature, theatre and culture, as well as political debate on eating disorders and related topics.

Bente Sommerfeldt is a specialist in adult clinical psychology with experience in eating disorders for over 15 years. She is a clinical director at the Institute of Eating Disorder in Oslo. This non-profit foundation, established by Prof  Skårderud  in 2014, strives to be an innovative centre of excellence in treatment, research, education and training. She is in the leadership of the Norwegian Institute of Mentalizing. She has extensive experience in providing and supervising mentalization based therapy and MBT-ED in Scandinavia.