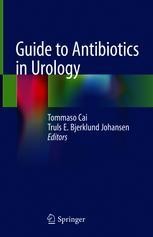 Guide to Antibiotics in Urology

This book provides a comprehensive analysis of the use of antibiotics in the urological setting. It is the first work to focus exclusively on the treatment of urinary tract infections, starting from the recent epidemiological and microbiological acquisitions in terms of bacterial resistance.

The structure of the book reflects everyday clinical practice, and the sections are divided in line with the level of clinical severity, starting from the uncomplicated lower urinary tract infections and continuing to severe uro-sepsis. Particular emphasis has been given to patient-related risk factors, to the role of antibiotic prophylaxis in urological surgical procedures, and to the treatment of male associated gland infections. The final section offers a dedicated tool for easy and rapid consultation, helping physicians in the everyday clinical practice setting.

The book offers the first practical guide for physicians who treat patients affected by urological infections. Further, it offers a simple guide to consulting for all physicians who occasionally care for these patients.
Show all
About the authors

Tommaso Cai graduated with a degree in Medicine from the University of Florence, Italy, in 2002, where he subsequently completed his specialization in Urology. In 2010 he was appointed a consultant urologist at the Department of Urology, Santa Chiara Hospital, Trento, Italy. In 2013 he became a member of the Board of Directors of the Italian Society of Andrology and chairman of the society’s Study Group on Urological Infections. He was appointed Associate Professor of Urology (ASN – Italy) in 2014, and in 2015 became a member of the European Association of Urology’s guideline board on urological infections. Dr. Cai is the author of more than 200 publications (including book chapters and over 100 original articles) on issues relating to prostate and bladder cancer, urinary tract infections, sexually transmitted diseases, and the use of novel technologies.

Truls Erik Bjerklund Johansen is Professor of Urology at the University of Oslo, Norway and Adjunct Assistant Professor of Experimental Urological Surgery at the University of Aarhus, Denmark. He is past Chairman and honorary member of the European Society for Infections in Urology (ESIU), a full section of the European Association of Urology (EAU), and special reviewer of the EAU Guidelines Panel on Urinary Tract Infections. Dr. Bjerklund Johansen has been a consultant in general surgery and urology since 1984 and was chairman of the Urology Department, Aarhus University Hospital, Denmark from 2007 to 2012 before joining Oslo University Hospital in 2013. He was a Professor of Medicine (Urology) and Chairman of the Norwegian Institute of Urology at the University of Tromsoe, Norway, from 1993 to 2001, Professor of Medical Science, Telemark University College, Norway from 2002 to 2005, and Professor of Urology at the University of Aarhus, Denmark from 2007 to 2012. His main research interests are urogenital infections, especially hospital acquired infections and antimicrobial resistance, and minimally invasive treatment of prostate and kidney cancer. He has published numerous original papers, review articles, case reports, book chapters, abstracts, comments and scientific documents, and has given more than 500 lectures at medical meetings and congresses. He is honorary member of the Hungarian Ass. of Urology.