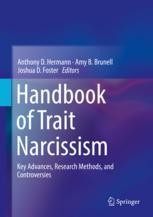 This unique reference surveys current theoretical and empirical advances in understanding individual differences in narcissistic personality, as well as the latest perspectives on controversies in the field. Wide-ranging expert coverage examines the many manifestations of narcissism, including grandiose, vulnerable, communal, and collective varieties. Narcissism’s etiology, the role of social media culture in its maintenance and amplification, and the complex phenomena of narcissistic leadership, spirituality, friendship, and love are just a snapshot of topics that are examined. The book’s section on intrapersonal processes delves into how the narcissistic mind works, as well as how narcissists feel about themselves and their peers. It also investigates narcissists’ grasp of emotions. Chapters explore associated personality traits and numerous other important correlates of narcissistic personality. New approaches to research, assessment methods, and opportunities for intervention—both immediate and long-term, are discussed throughout. In addition, trait narcissism is examined in an even-handed manner that incorporates state-of-the-art research into antecedents and consequences (both good and bad) of narcissistic personality.

Among the topics in the Handbook:

Offering nuanced analysis of a particularly timely subject, The Handbook of Trait Narcissism is fascinating and informative reading for psychologists and psychology students, as well as scholars in anthropology, sociology, economics, political scientists, and more.

Dr. Anthony D. Hermann is a Professor of Psychology at Bradley University in Peoria IL. Professor Hermann received his Ph.D. in Social Psychology at The Ohio State University and has also held faculty positions at Kalamazoo College and Willamette University. He has published papers on the intersection of self-evaluation and social behavior for nearly twenty years. His current research focuses on better understanding the motivations that underlie grandiose narcissists’ spiritual, cognitive, and interpersonal behavior. He has received national recognition for his commitment to mentoring undergraduate research and relishes any opportunity has to bask in the reflected glory of his current and former students.

Dr. Amy B. Brunell is an Associate Professor at The Ohio State University, Mansfield. She received her M.A. in psychology from the College of William and Mary and her Ph.D. from the University of Georgia in 2007. She teaches courses in social psychology, personality, the self, and interpersonal relationships. Her research concerns the role of narcissism in social contexts, such as emergent leadership, decision making, academic cheating, as well as romantic relationship behaviors. She has published papers in academic journals such as Personality and Social Psychology Bulletin, Journal of Experimental Social Psychology, and the Journal of Research in Personality. She serves on the editorial board of Assessment. She prides herself in conducting and evaluating research with her undergraduate students to help them prepare for graduate school and beyond. Dr. Joshua D. Foster, a Washington, D.C. native, earned his Ph.D. in social psychology from the University of Georgia in 2005. Since then, he has been a member of the Behavior and Brain Sciences faculty (Psychology Department) at the University of South Alabama where he was awarded tenure in 2011 and promoted to rank of Full Professor in 2017. Dr. Foster’s principal areas of research are personality and individual differences, psychometrics, and latent variable modeling. He has published more than 50 papers that have been cited more than 6,000 times in the literature. His work has also been featured in a variety of newspapers and magazines, including The New York Times, The Boston Globe, The Wall Street Journal, and The Huffington Post. Dr. Foster has mentored numerous students in his laboratory who have gone on to graduate programs, including University of Alabama at Tuscaloosa, University of Alabama at Birmingham, Columbia University, Colorado State University, University of Florida, University of Georgia, University of North Carolina at Chapel Hill, and Penn State University. When not working, he enjoys watching television, playing video games, thinking about exercising, and hanging out with his family. His wife, Dr. M. Hope Jackson, is a practicing clinical psychologist who specializes in treating anxiety, mood, and eating disorders. Together, they have two boys, Mathew and Colin, who specialize in being silly.