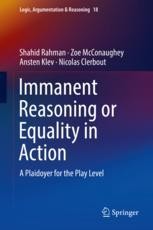 Immanent Reasoning or Equality in Action

A Plaidoyer for the Play Level

This monograph proposes a new way of implementing interaction in logic. It also provides an elementary introduction to Constructive Type Theory (CTT). The authors equally emphasize basic ideas and finer technical details. In addition, many worked out exercises and examples will help readers to better understand the concepts under discussion.

One of the chief ideas animating this study is that the dialogical understanding of definitional equality and its execution provide both a simple and a direct way of implementing the CTT approach within a game-theoretical conception of  meaning. In addition, the importance of the play level over the strategy level is stressed, binding together the matter of execution with that of equality and the finitary perspective on games constituting meaning.

According to this perspective the emergence of concepts are not only games of giving and asking for reasons (games involving Why-questions), they are also games that include moves establishing how it is that the reasons brought forward accomplish their explicative task. Thus, immanent reasoning games are dialogical games of Why and How.

Shahid Rahman is full-professor (classe exceptionnelle) of logic and epistemology at the Université de Lille-Nord-pas-de-Calais, Sciences Humaines et Sociales. He is also researcher at the UMR-CNRS 8163 : STL.

Prof. Rahman works on philosophy and history of logic and the foundations of mathematics. He is the leading researcher in the field of the dialogical approach to logic. Prof. Rahman is the main editing director of two collections of books in Springer, namely, Logic, Epistemology and the Unity of Science (more than 40 volumes edited so far) ; and Logic, Argumentation and Reasoning, Perspectives from the Social Sciences and the Humanities. He is also main editor director of three other collections in College Publications, London. His most recent book include N. Clerbout/S. Rahman: Linking Game-Theoretical Approaches with Constructive Type Theory. Dialogical Strategies, CTT Demonstrations and the Axiom of Choice, Dordrecht, Springer, 2015; a

Ansten Klev is postdoctoral fellow at the Czech Academy of Sciences. He holds a PhD in philosophy from Leiden University. His research interests are primarily in the philsophy and history of logic and mathematics. He is especially interested in the philosophical foundations of Martin-Löf's type theory.

Zoe McConaughey is a Ph.D student in history and philosophy of logic at the Université de Lille and the Université du Québec à Montréal under the joint supervision of Shahid Rahman and Mathieu Marion; her doctoral dissertation, "La Science et l'activité du dialecticien", aims at developping Aristotle's logic within the dialogical framework of immanent reasoning in order to highlight the dialectical background of the Organon.

​Nicolas Clerbout is Profesor of Philosophy at the University of Valparaíso, Chile. He works on logic and philosophy of logic and is an expert in the field of the dialogical approach to logic. He also serves as executive editor for the Springer collection "Logic, Epistemology and the Unity of Science" and as editor for one other collection in College Publications.
Show all
Reviews

“The book is of a valuable contribution to the literature on DL and CTT, and so far it can be very useful for those intending to know much about these two philosophically interesting logical frameworks. … The book is no doubt a highly valuable contribution to the studies on logic and philosophy of logic.” (Mohammad Shafiei, Analisis Filosofico, Vol. 39 (2), November, 2019)