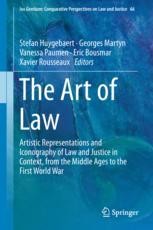 The Art of Law

Artistic Representations and Iconography of Law and Justice in Context, from the Middle Ages to the First World War

The contributions to this volume were written by historians, legal historians and art historians, each using his or her own methods and sources, but all concentrating on topics from the broad subject of historical legal iconography. How have the concepts of law and justice been represented in (public) art from the Late Middle Ages onwards? Justices and rulers had their courtrooms, but also churches, decorated with inspiring images. At first, the religious influence was enormous, but starting with the Early Modern Era, new symbols and allegories began appearing. Throughout history, art has been used to legitimise the act of judging, but artists have also satirised the law and the lawyers; architects and artisans have engaged in juridical and judicial projects and, in some criminal cases, convicts have even been sentenced to produce works of art. The book illustrates and contextualises the various interactions between law and justice on the one hand, and their artistic representations in paintings, statues, drawings, tapestries, prints and books on the other.

Stefan Huygebaert is a Research Foundation Flanders (FWO) PhD Fellow at the Ghent Legal History Institute and Department of Art History, Musicology and Theatre Studies (Ghent University). His dissertation, entitled Visual Ideals of Law and Justice, is an iconological study of legal imagery in nineteenth-century Belgium. In 2014-2015, and again in 2016-2017, Stefan was a PhD fellow (Stipendiat) within the Minerva Research Group ‘The Nomos of Images: Manifestation and Iconology of Law’ at the Kunsthistorisches Insitut in Florenz (Max-Planck-Institut). He publishes and teaches on legal iconography and nineteenth-century art, and recently co-edited the catalogue for the exhibition The Art of Law: Three Centuries of Justice Depicted (Groeningemuseum, Bruges).
Georges Martyn studied Law (1984-89) and Medieval Studies (1989-91) in Leuven (Belgium) and obtained a PhD degree in Law at the Catholic University of Leuven in 1996, with a dissertation on private law legislation in the early modern Netherlands. He has been an ‘advocaat’ (barrister/lawyer) between 1992 and 2008 at the bar of Kortrijk, is now honorary member of the Ghent bar, and is a substitute justice of the peace. He is full professor at the Law Faculty of Ghent University, teaching ‘History of Politics and Public Law’, ‘General Introduction to Belgian Law’ and ‘Law & the Humanities’. His publications deal with legal history in the Netherlands in the Early Modern Era, the reception of Roman law, the legal professions, the evolution of the sources of the law in the nineteenth and twentieth centuries and legal iconography and iconology. He is a member of the Belgian Royal Commission for the Edition of the Old Law, the Flemish editor-in-chief of the Belgian-Dutch legal history review Pro Memorie and co-editor of the series Studies in the History of Law and Justice.
Vanessa Paumen is an art historian focused on Northern Renaissance art. Since 2010, she has been the coordinator of The Flemish research centre for the arts in the Burgundian Netherlands at the Groeningemuseum in Bruges (Belgium). Its mission is to initiate, facilitate, stimulate and disseminate research related to Flemish art of the 15th-16th centuries. She was curator of the exhibition "The art of law. Three centuries of justice depicted" at the Groeningemuseum (27 October 2016 – 5 February 2017) and author/editor of the accompanying catalogue, published by Lannoo Publishers, 2016.
Eric Bousmar is full professeur at the Université Saint-Louis in Brussels, where he is co-director of the Centre de Recherches en Histoire du Droit et des Institutions. He has got a doctoral degree in history from the Université catholique de Louvain, and a degree in medieval studies from the Katholieke Universiteit Leuven. He mainly publishes on power, society and mentality in the Southern Low Countries, particularly in the Burgundian era (XV-XVI c.), as well as on the art of history writing throughout the ages, stressing the interaction of literature and history, especially in relation to the Burgundian State, Belgium and Brabant.
Xavier Rousseaux is research director at the National Fund for Scientific Research (FRS-FNRS) and professor at the Université catholique de Louvain, Louvain-la-Neuve, Centre for Law & Justice History.  Working extensively on of the history of crime and justice, in 2007-2012, he coordinated the BELSPO Network Justice and Society, and Justice and Populations. The Belgian experience in international Perspective, 1795-1950.

“This visually engaging book on visual studies, legal and art history, displays more than a hundred photographs of works of art, mainly on European and Indian iconologies. … this work builds bridges over various fields of study, in order to approach the complex question of the representation of legal concepts in historical legal iconography.” (Jeffrey Ellsworth and Sandy Lamalle, International Journal for the Semiotics of Law, Vol. 31, 2018)