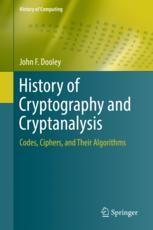 History of Cryptography and Cryptanalysis

Codes, Ciphers, and Their Algorithms

This accessible textbook presents a fascinating review of cryptography and cryptanalysis across history. The text relates the earliest use of the monoalphabetic cipher in the ancient world, the development of the “unbreakable” Vigenère cipher, and an account of how cryptology entered the arsenal of military intelligence during the American Revolutionary War. Moving on to the American Civil War, the book explains how the Union solved the Vigenère ciphers used by the Confederates, before investigating the development of cipher machines throughout World War I and II. This is then followed by an exploration of cryptology in the computer age, from public-key cryptography and web security, to criminal cyber-attacks and cyber-warfare. Looking to the future, the role of cryptography in the Internet of Things is also discussed, along with the potential impact of quantum computing.

Topics and features: presents a history of cryptology from ancient Rome to the present day, with a focus on cryptology in the 20th and 21st centuries; reviews the different types of cryptographic algorithms used to create secret messages, and the various methods for breaking such secret messages; provides engaging examples throughout the book illustrating the use of cryptographic algorithms in different historical periods; describes the notable contributions to cryptology of Herbert Yardley, William and Elizebeth Smith Friedman, Lester Hill, Agnes Meyer Driscoll, and Claude Shannon; concludes with a review of tantalizing unsolved mysteries in cryptology, such as the Voynich Manuscript, the Beale Ciphers, and the Kryptos sculpture.This engaging work is ideal as both a primary text for courses on the history of cryptology, and as a supplementary text for advanced undergraduate courses on computer security. No prior background in mathematics is assumed, beyond what would be encountered in an introductory course on discrete mathematics.
Show all
About the authors

John F. Dooley is the William and Marilyn Ingersoll Professor Emeritus of Computer Science at Knox College in Galesburg, Illinois. Before returning to teaching in 2001, he spent more than 15 years in the software industry as a developer, designer, and manager working for companies such as Bell Telephone Laboratories, McDonnell Douglas, IBM, and Motorola. His other publications include the popular Springer title Codes, Ciphers and Spies: Tales of Military Intelligence in World War I.

Selected by Choice magazine as an Outstanding Academic Title for 2019

“Dooley (emer., Knox College) provides an excellent overview of cryptographic devices and algorithms, starting with ancient Rome and up to WW II, and covering monoalphabetic ciphers, polyalphabetic substitutions, the Vigenére cipher, and cipher machines such as Enigma. … This is a book that needs to be read!” (J. Johnson, Choice, Vol. 56 (10), June, 2019)