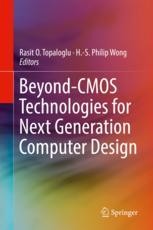 This book describes the bottleneck faced soon by designers of traditional CMOS devices, due to device scaling, power and energy consumption, and variability limitations. This book aims at bridging the gap between device technology and architecture/system design. Readers will learn about challenges and opportunities presented by “beyond-CMOS devices” and gain insight into how these might be leveraged to build energy-efficient electronic systems.

Rasit O. Topaloglu works on next generation computer design at IBM. After internships at Nortel Networks, Alcatel Microelectronics, and Qualcomm, since 2005 he has worked at AMD, GLOBALFOUNDRIES and IBM. He obtained his B.S. in Electrical&Electronic Engineering at Bogazici University, M.S. and Ph.D. at University of California San Diego in Computer Science and Engineering. He has 20 issued US patents covering semiconductor devices and interconnects and around fifty international publications. He has a best paper award at ISQED. He serves as a technical advisory board member at Semiconductor Research Corporation for IBM. He has served in the technical program committees of DAC, DATE, ICCAD, ISPD, ISQED, and SLIP. He served as the General Chair of ACM/IEEE DAC Workshop on Design Automation for Beyond-CMOS Technologies in 2015. He edited More than Moore Technologies in Next-Generation Computer Design, Springer, 2015. He is an IEEE Senior Member.

H.-S. Philip Wong is the Willard R. and Inez Kerr Bell Professor in the School of Engineering. He joined Stanford University as Professor of Electrical Engineering in September, 2004. From 1988 to 2004, he was with the IBM T.J. Watson Research Center.

At IBM, he held various positions from Research Staff Member to Senior Manager. While he was Senior Manager, he had the responsibility of shaping and executing IBM’s strategy on nanoscale science and technology as well as exploratory silicon devices and semiconductor technology. During his time at IBM, he managed pathfinding research on high-k/metal gate, strained silicon, alternative channel materials such as Ge and III-V, multi-gate FinFET, ultra-thin SOI – many of these have now become product technology at various companies.