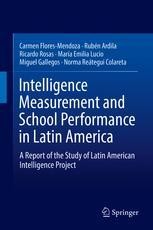 A Report of the Study of Latin American Intelligence Project

This book presents the results of the most complete and updated assessment of cognitive resources of students in Latin America: the Study of Latin American Intelligence (SLATINT). During four years, top researchers of the region used a standardized set of cognitive measures to assess 4,000 students aged between 14 and 15 years from six countries: Brazil, Argentina, Mexico, Chile, Colombia and Peru. The data collected and now analyzed in this volume is a first step to understand the human cognitive capital of the region, a crucial resource for any country today. Intelligence research has shown that the cognitive skills of a population are strongly associated with the school performance of its students and the development of a nation. This makes Intelligence Measurement and School Performance in Latin America a valuable tool both for Latin American researchers and authorities engaged in the improvement of each country’s human resources and for psychologists, educators and other social scientists dedicated to the study of the impact of intelligence in the development of nations.

Carmen Flores-Mendoza is psychologist and associate professor at the Federal University of Minas Gerais, Brazil. She received her doctorate degree from the University of São Paulo in 1999, and conducted academic studies at the Autonomous University of Madrid in 1999-2000, and post-doctorate studies at the University of California, Davis, in 2011-2012 (scholarship granted by CAPES). She was the coordinator of the post-graduate program in Neuroscience (2014-2016) and Psychology (2017-2018) of Federal University of Minas Gerais and co-founder of the Laboratory of Individual Differences of the same institution. She is also co-founder of the Psychological Assessment Society of the Minas Gerais state (SAPSI-MG). Her research interests are in the areas of individual differences in intelligence and personality, measurement, psychometrics and group differences. She has published around 70 scientific papers as author or co-author and is reviewer of several scientific journals. She was the general coordinator of the SLATINT project.

Rubén Ardila. Colombian research psychologist. He received his undergraduate training at the National University of Colombia, and his Ph.D. in experimental psychology at the University of Nebraska-Lincoln. His research topics are experimental psychology, history of psychology and social issues. He has published 32 books and more of 300 research articles and book chapters. Dr. Ardila has been part of  the executive committee of the International Union of Psychological Science (IUPsyS) for 12 years, and  the Board of Directors of the International Association of Applied Psychology (IAAP). He has received national and international recognitions, among them the Colombian Science Prize (2004), and the APA Award for International Contributions to the International Advancement of Psychology (2007). He lives and works in Bogotá, Colombia. He was the collaborator of the SLATINT project in Colombia.

Ricardo Rosas Díaz is a psychology lecturer at the Pontificia Universidad Católica de Chile and holds a Ph.D. in Cognitive Psychology from Freie Universität, Berlin (1991). He is full Professor at the School of Psychology of the Pontificia Universidad Católica de Chile and Director of the Center for the Development of Inclusion Technologies (Spanish: CEDETi). His research interests are the relations between play and learning, and the development of  ICT-based systems that support the education of disabled children, as well their assessment. He has written more than 20 international indexed papers, and four books (all in Spanish). He was the collaborator of the SLATINT project in Chile.

María Emilia Lucio-Gómez Maqueo is psychologist and associate professor at the National Autonomous University of Mexico. She received her Phd. degree from the same institution in 1976. She made a speciality in Psychoanalysis and a diplomat in Narrative Therapy.  Actually she coordinates  a  Master´s degree in Child Psychotherapy, in  Psychology School, where she is also professor in the postgraduate Program in Psychology and she has  been mentor of more than 240 thesis. She is a member of the National System of Researchers (SNI), level 3. She is  also  President of the Mexican Society of Suicidiology and she is a member of other associations. She received several awards for her contribution to the Mexican psychology, in 2017 she received Lifetime Career Award  by Stress and Anxiety Research Society. In that year she also fulfilled 50 years of academic work in the UNAM.  She has published almost 60 scientific papers and 17 books.  .  Her research interests are in areas such as personality assessment, clinical psychology, mental health, and types of intervention and prevention in adolescence and childhood. She coordinated the Mexican standardization of several scales related to personality and mental health. She was the collaborator of the SLATINT project in Mexico.

Norma Reátegui Colareta is psychologist and professor at the San Ignacio de Loyola University, Peru, where she is also dean of the Faculty of Humanities. She received her PhD from the Peruvian University Cayetano Heredia in 1993 and acted as consultant for Latin American projects sponsored by UNICEF and the World Bank regarding education. She was the collaborator of the SLATINT project in Peru.