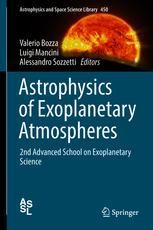 In this book, renowned scientists describe the complexity of exoplanetary atmospheres and all of the observational techniques that are employed to probe them. Readers will also find a panoramic description of the atmospheres of the planets within the Solar System, with explanation of considerations especially relevant to exoplanets. Over the past few years, thousands of exoplanets have been discovered orbiting around stars relatively close to the Solar System. Astronomers have revealed how varied these exoplanets are (rocky, icy, giant) and how diverse their architecture can be, confirming science fiction images in several cases and extending beyond the human imagination in others. The natural next step is to study their atmospheres and to understand their chemical composition and the physical processes taking place in their interiors, with the aim of detecting biomarkers. This book will appeal to all who seek a comprehensive, state-of-the-art account of the latest knowledge in the rapidly developing and highly interdisciplinary field of exoplanet research.

Valerio Bozza is a Staff Researcher in the Physics Department of Salerno University, Italy. He has worked at CERN with Gabriele Veneziano on string cosmology and cosmological perturbations, and become an expert of gravitational lensing by black holes, publishing several reviews. He has then developed the fastest publicly available code for modeling planetary microlensing events, which is at the basis of all major existing modeling platforms. He is a member of the WFIRST Microlensing Science Investigation Team, and member of several microlensing collaborations searching for extrasolar planets. His real-time modeling platform has become the standard reference in the community for driving follow-up observations. He is responsible for the Astronomical Observatory of the University and Salerno, performing microlensing observations and validation of transiting extrasolar planets. He is deeply involved in teaching and dissemination, hosting visitors and schools at the Observatory in monthly visits.

Luigi Mancini recently became a research staff scientist in the Department of Physics, University of Rome Tor Vergata, Italy, having previously held the same role at the Max Planck Institute for Astronomy, Heidelberg, Germany. He studied Physics and Astrophysics at the University of Salerno, Italy, and then at the University of Zurich, Switzerland. In 2017 he gained Italian National Academic Qualification as a full professor. He is member of the executive board of the HAT-South Project and work on the detection and characterization of transiting exoplanets. In recent years he has been a collaborator of the JWST Early Release Science working group, and member of other collaborations. He is the author of more than 150 papers in peer-reviewed journals and acts as a reviewer for The Astrophysical Journal and other journals. His h-index is 32.

Alessandro Sozzetti gained his degree in Physics from Università degli Studi di Torino, Italy in 1997 and went on to obtain a PhD in Physics from the University of Pittsburgh, USA in 2005. He is a Senior Researcher (Level II) at INAF – Osservatorio Astrofisico di Torino. His research interests are focused on the search for, and orbital and physical characterization of, extrasolar planetary systems and brown dwarfs and the characterization of planet hosts (chemical composition, atmospheric and physical parameters). He has leading roles (PI, Co-PI, Chair, Co-I, WP lead) in several ground-based (HARPS-N, GIARPS, ESPRESSO) and space-borne (Gaia, TESS, PLATO, ARIEL) programs aimed at exoplanet detection and characterization. The Coordinator of the EU-funded collaborative project ETAEARTH for the characterization of terrestrial planetary systems with Kepler and HARPS-N, he has been co-organizer or co-chair of six major conferences. He is the author of 125 refereed journal papers, including one review article, and contributor to or editor of six collectve volumes.