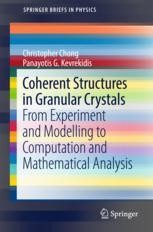 From Experiment and Modelling to Computation and Mathematical Analysis

This book summarizes a number of fundamental developments at the interface of granular crystals and the mathematical and computational analysis of some of their key localized nonlinear wave solutions. The subject presents a blend of the appeal of granular crystals as a prototypical engineering tested for a variety of diverse applications, the novelty in the nonlinear physics of its coherent structures, and the tractability of a series of mathematical and computational techniques to analyse them. While the focus is on principal one-dimensional solutions such as shock waves, traveling waves, and discrete breathers, numerous extensions of the discussed patterns, e.g., in two dimensions, chains with defects, heterogeneous settings, and other recent developments are discussed. The emphasis on the subject was motivated by models in condensed matter physics, ferroelectrics, high energy physics, and statistical mechanics, leading to developments in mathematical analysis, numerical computation and insights on the physical aspects of the model. The book appeals to researchers in the field, as well as for graduate and advanced undergraduate students. It will be of interest to mathematicians, physicists and engineers alike.

hristopher Chong graduated (summa cum laude) from the University of New Hampshire in 2004 with an interdisciplinary BSc in Mathematics and Computer Science. He received his MSc in Applied Mathematics from San Diego State University in 2006. After being awarded a three graduate research stipend, he completed his PhD in Mathematics at the Karlsruhe Institute of Technology, Germany in 2009 under the supervision of Guido Schneider. He was awarded a German Science Foundation (DFG) post-doctoral fellowship at the University of Stuttgart for the academic year 2009 – 2011. He was a Visiting Assistant Professor in the Department of Mathematics and Statistics at the University of Massachusetts, Amherst from 2011-2013. While there, he was awarded a Simons/AMS travel award for junior mathematicians. In 2014-2015 he was a post-doc at the ETH, Zurich in the Department of Mechanical and Processes Engineering. He is currently an Assistant Professor in the Mathematics Department at Bowdoin College. Chong is currently supported by an NSF award (standard grant).

Panayotis Kevrekidis earned his B.Sc. Degree from the Department of Physics of the University of Athens in 1996 graduating first in a class of about 300 with a GPA of 9.06/10.0. He subsequently joined the Physics Department of Rutgers University from where he earned a M.S. (1998), an M.Phil. (2000) and a Ph.D. (2000) in  Physics working under the supervision of Profs. J.L. Lebowitz (Mathematics and Physics) and P.G. Georgopoulos (Environmental Science). His Ph.D. Thesis was entitled ``Lattice Dynamics of Solitary Wave Excitations''. He then assumed a post-doctoral research post for a year split between the Program in Applied and Computational Mathematics of Princeton University (10/2000-02/2001) and the Theoretical Division and the Center for NonLinear Studies of the Los Alamos National Laboratory (03/2001-08/2001). From September 2001, he joined the Faculty ranks of the Department of Mathematics and Statistics of the University of Massachusetts (UMass), Amherst, as an Assistant Professor. He was awarded tenure and was promoted to Associate Professor in June 2005. Between September 2010 and September 2015, he was a Full Professor at UMass, Amherst and since then he holds a Distinguished University Professorship.

Kevrekidis has received numerous awards and distinctions for his work during his time at UMass. These include, among others, a CAREER award in Applied Mathematics from the U.S. NSF (in 2003), a Humboldt Research Fellowship from the Humboldt Foundation and an Outstanding Paper Prize from the Society for Industrial and Applied Mathematics (SIAM),  the 2008 International Stephanos Pnevmatikos Award for research in Nonlinear Phenomena, the 2013 J.D. Crawford Prize of the Activity Group on Dynamical Systems of SIAM,  and the A.F. Pallas award from the Academy of Athens (2013).  He was recently  (2014-2015) the Stanislaw M. Ulam Scholar at the Center for Nonlinear Studies in the Los Alamos National Laboratory  and the same year he was elected a Fellow of the American Physical Society (2014). In 2015 he was awarded the Bessel Prize from the Alexander von Humboldt Foundation, in 2016 he received the inaugural Brooke Benjamin Prize in Nonlinear Waves, as well as a Greek Diaspora Fellowship. In 2017 he was named a Fellow of the Society for Industrial and Applied Mathematics.His research has been supported by numerous sources such as the US NSF,  the US Air Force, the European Research Council as well as numerous private Foundations (Alexander von Humboldt, Alexander S. Onassis Public Benefit Foundation, and US-Israel Binational Science Foundation).

Kevrekidis' interests are centered around the nonlinear dynamics of solitary waves in nonlinear partial differential equations and in lattice nonlinear differential difference equations and the properties (existence, stability, dynamics) of such waves. A focal point of this work concerns the applications of such tools and techniques to  systems from Physics (especially nonlinear optics and atomic physics), and Materials Science, Biology and Chemistry. He has published over 500 research papers in a wide variety of  venues in nonlinear physics and applied mathematics, given over 150 research lectures in conferences and universities around the globe, is an associate editor of 2  journals and has authored 5 books; the first is entitled “Emergent Nonlinear Phenomena in Bose-Einstein Condensates” and is prefaced  by Wolfgang Ketterle, one of the Nobel Prize Winners in that field, while the second is entitled “The Discrete Nonlinear Schrodinger Equation: Mathematical Analysis, Numerical Computations and Physical Perspectives”. They were published by Springer-Verlag in 2008 and 2009, respectively. He published his third book in November 2013, an Edited volume together with a number of his collaborators on  “Localized Excitations in Nonlinear Complex Systems: Current State of the Art and Future Perspectives”, again by Springer-Verlag and his fourth book  in 2014 with two co-Editors on “The sine- Gordon Model and its Applications: From Pendula and Josephson  Junctions to Gravity and High Energy Physics”.  His fifth book on ``The Defocusing Nonlinear Schroedinger Equation: From Dark Solitons to Vortices and Vortex Rings'' has been published by SIAM in August 2015. As quantitative measures of his  impact to the research community, one can mention the h-index of 46 (in Web of Science, 61 in Google Scholar) and that his work has been cited over 15500 times (according to Google Scholar).