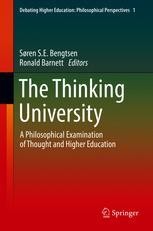 A Philosophical Examination of Thought and Higher Education

This book reinvigorates the philosophical treatment of the nature, purpose, and meaning of thought in today’s universities. The wider discussion about higher education has moved from a philosophical discourse to a discourse on social welfare and service, economics, and political agendas. This book reconnects philosophy with the central academic concepts of thought, reason, and critique and their associated academic practices of thinking and reasoning.

Thought in this context should not be considered as a merely mental or cognitive construction, still less a cloistered college, but a fully developed individual and social engagement of critical reflection and discussion with the current pressing disciplinary, political, and philosophical issues. The editors hold that the element of thought, and the ability to think in a deep and groundbreaking way is, still, the essence of the university. But what does it mean to think in the university today? And in what ways is thought related not only to the epistemological and ontological issues of philosophical debate, but also to the social and political dimensions of our globalised age? In many countries, the state is imposing limitations on universities, dismissing or threatening academics who speak out critically.  With this volume, the editors ask questions such as: What is the value of thought? What is the university’s proper relationship to thought?

To give the notion of thought a thorough philosophical treatment, the book is divided into in three parts. The focus moves from an epistemological perspective in Part I, to a focus on existence and values in higher education in Part II, and then to a societal-oriented focus on the university in Part III. All three parts, in their own ways, debate the notion of thought in higher education and the university as a thinking form of being.

“Barnett and Bengtsen make a valuable contribution to the development of a sustained philosophical approach to the study of higher education. … The Thinking University examines thought in a manner that opens up imaginative and practical new possibilities for the future of higher education. … The Thinking University nonetheless represents a significant achievement in bringing together a host of international scholars to collectively envision preferred futures for the university, understood here as a fundamentally thoughtful and ever-evolving institution.” (Sheena Hyland, London Review of Education, Vol. 17 (3), 2019)