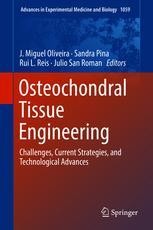 This book covers the most recent developments in the field of osteochondral tissue engineering (OCTE) and covers in detail the concepts and current challenges for bone and cartilage repair and regeneration. Specific topics include viscosupplementation, biologicals, tissue engineering approaches, in vitro and in vivo models, and technological advances with stem cells, bioreactors, and microfluidics. Osteochondral Tissue Engineering: Challenges, Current Strategies, and Technological Advances presents challenges and strategies in the field of osteochondral regeneration and serves as a core reference for biomedical engineering students and a wide range of established researchers and professionals working in orthopedics.

Dr. Joaquim Miguel Oliveira, BSc, PhD is a senior researcher “Investigador FCT 2012 and FCT 2015” at the Portuguese Government Associate Laboratory ICVS/3B´s-University of Minho. Currently, he is a volunteer lecturer at the Faculty of Medicine, U. Porto and Dept. of Polymer Eng., UM. Since 2001, he has been involved in the development of biomaterials from natural origin for tissue engineering and regenerative medicine. His research activities have been increasingly focused on nanomedicine, stem cells and 3D in vitro models of disease.

Prof. Rui L. Reis, PhD, DSc, Hon. Causa MD (UGranada) is the Vice-Rector for R&D, Director of the 3B’s Research Group and of the ICVS/3B´s, of UMinho – Portugal. He is the CEO of the European Institute of Excellence on TERM, and the President-elect of Global TERMIS (Tissue Engineering & Regenerative Medicine International Society) and the editor-in-chief of the JTERM.