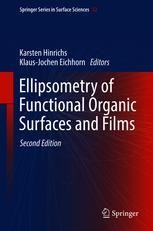 This new edition provides a state-of-the-art survey of ellipsometric methods used to study organic films and surfaces, from laboratory to synchrotron applications, with a special focus on in-situ use in processing environments and at solid-liquid interfaces. Thanks to the development of functional organic, meta- and hybrid materials for new optical, electronic, sensing and biotechnological devices, the ellipsometric analysis of optical and material properties has made tremendous strides over the past few years.

The second edition has been updated to reflect the latest advances in ellipsometric methods. The new content focuses on the study of anisotropic materials, conjugated polymers, polarons, self-assembled monolayers, industrial membranes, adsorption of proteins, enzymes and RGD-peptides, as well as the correlation of ellipsometric spectra to structure and molecular interactions.

Karsten Hinrichs received his PhD in solid state physics from the TU Berlin, Germany and he holds a habilitation degree in Physical Chemistry of the TU Dresden. Since 2000 he works as researcher at the Berlin Department of the Leibniz-Institut für Analytische Wissenschaften – ISAS – e. V.. Since 2012 he is the head of the working group In situ Spectroscopy. He became a member of the Graduate School of Analytical Sciences at Humboldt University Berlin in 2012 and since 2005 he is member of the board of the German Working Group Ellipsometry (www.akepdv.de). Currently he is member of the Society for Applied Spectroscopy (SAS), American Chemical Society (ACS) and German Physical Society (DPG).

Karsten Hinrichs has undertaken several research periods to Prof. S. Minko's working group at the Clarkson University and the University of Georgia, U.S.A. since 2008.

He was the program chair of the 7th International Conference in Spectroscopic Ellipsometry 2016 in Berlin and is a frequent contributor of articles and book chapters for renowned international journals. His research focusses on the optical analysis of functional surfaces and thin films and the development of new infrared spectroscopic measurement strategies with polarized light. Recent work was dedicated to structure-spectra correlations of functional films at solid liquid interfaces and infrared nanopolarimetric studies of structure and anisotropy of thin films and surfaces.

Klaus-Jochen Eichhorn is head of the Analytical Department within the Institute of Macromolecular Chemistry at the Leibniz Institute of Polymer Research Dresden e. V., Germany (since 2000). In 1980 he received his Diploma in Chemistry from Friedrich-Schiller-University Jena, Germany, then he moved for a PhD position to Dresden University of Technology, Institute of Physical Chemistry and Electrochemistry where he finished his PhD studies on ellipsometry of iron and steel surfaces in model atmospheres in 1985. Since then Dr. Eichhorn has been working on the field of polymer chemistry and physics, especially polymer characterization using spectroscopic methods.

Polymer brushes, materials for organic electronics, for sensor and biomedical applications, but also microplastic particles from the environment are in the focus of his recent studies.