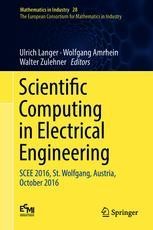 This collection of selected papers presented at the 11th International Conference on Scientific Computing in Electrical Engineering (SCEE), held in St. Wolfgang, Austria, in 2016, showcases the state of the art in SCEE.

The aim of the SCEE 2016 conference was to bring together scientists from academia and industry, mathematicians, electrical engineers, computer scientists, and physicists, and to promote intensive discussions on industrially relevant mathematical problems, with an emphasis on the modeling and numerical simulation of electronic circuits and devices, electromagnetic fields, and coupled problems. The focus in methodology was on model order reduction and uncertainty quantification.

This extensive reference work is divided into six parts: Computational Electromagnetics, Circuit and Device Modeling and Simulation, Coupled Problems and Multi‐Scale Approaches in Space and Time, Mathematical and Computational Methods Including Uncertainty Quantification, Model Order Reduction, and Industrial Applications. Each part starts with a general introduction, followed by the respective contributions.

This book will appeal to mathematicians and electrical engineers. Further, it introduces algorithm and program developers to recent advances in the other fields, while industry experts will be introduced to new programming tools and mathematical methods.