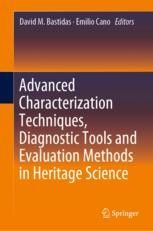 This book details the application of advanced characterisation techniques and diagnostic tools to heritage science, including the evaluation of heritage assets’ condition, their preservation and restoration.

It examines the use of electrochemical techniques in conservation science, with a particular focus on how to solve problems in taking on-site measurements. Specifically, it introduces readers to a new gel polymer (GPE) electrochemical cell developed by the authors for the characterisation of metallic heritage objects. Other techniques used to characterise and monitor reinforced concrete objects in more modern buildings are also covered, including non-destructive electrochemical techniques that allow steel corrosion to be assessed in these structures, and in those that are used to protect and repair such buildings.

The usefulness of the NMR-Mouse nuclear magnetic resonance sensor in the assessment and preservation of softer heritage materials, such as wood, parchment, bone, and painted walls, is covered, as well as Infrared reflectography for examining paintings and laser cleaning for restoring them. The book introduces ultra-High Performance Liquid Chromatography (u-HPLC) with a diode-array (DAD) and mass–mass (MS-MS) quadruple time-of-flight spectroscopy (QTOF). This new technique can be applied to the analysis and identification of natural and synthetic organic pigments and its use is demonstrated in several case studies.

This book provides a rigorous scientific grounding in the application of state-of-the-art techniques in heritage science and conservation, and offers a practical handbook for practitioners.
Show all
About the authors

Dr. DAVID M. BASTIDAS, is Associate Professor at The University of Akron, Dept. Chemical, Biomolecular and Corrosion Engineering and the National Center for Education and Research on Corrosion & Materials Performance, NCERCAMP (Akron, OH, US). He is responsible for the research line in Corrosion of Steel in Concrete, Infrastructure and Inhibition Processes. Dr. D.M. Bastidas gained his PhD in Material Science and Technology (2004) as well as his BSc in Chemistry (1999) at the University of Barcelona (Spain).

He is the Section Editor of Innovations in Corrosion and Materials Science Journal, Editorial Board member for International Journal of Nanomaterials and Chemistry, Editorial Board member for Journal of Surface Engineered Materials and Advanced Technology and Editorial Board member for International Journal of Constructive Research in Civil Engineering and Editorial Board member of npj-Materials Degradation (Nature-Research Journal).Dr. D. M. Bastidas is Research Committee Member of the National Association of Corrosion Engineers (NACE) and Infrastructure Committee Member, Vice-Chairman of Corrosion of Steel in Concrete Committee of the European Federation of Corrosion (EFC) and active member of the Electrochemical Society (ECS) and Sociemat (Spain). He is Faculty Advisor of Corrosion Squad at The University of Akron. Dr. Bastidas was Senior Researcher at CENIM-CSIC (2006-2017) and Associated Professor at University Carlos III (2012-2017), both in Madrid (Spain). He was Research Fellow at the Centre for Advanced Materials, School of Chemistry at University of St. Andrews (2004-2006). He contributed to the spin-off St Andrews Fuel Cells (Scotland, UK). Dr. D.M. Bastidas has actively participated in more than 20 research projects. He has been involved in different research areas; Corrosion Processes and its Inhibition: corrosion of steel in concrete, copper IUD contraceptives, localized corrosion, atmospheric and high temperature corrosion, and corrosion inhibitors. Focus on synthesis and processing of smart corrosion inhibitors, electrochemical and microstructural characterization, elucidation of Corrosion and Inhibition Mechanisms. Dr. D.M. Bastidas authored more than 90 scientific publications (received more than 1000 citations), and edited book Stainless Steel Reinforcements in Concrete. He presented over 70 communications to conferences (including 10 invited conferences), as well as produced two patents. He supervised 15 Ph.D. and MSc Thesis.

He collaborated with many international research groups in academia and actively in contact with industrial partners and corrosion sector leader companies in the international scenario.

Dr Emilio Cano is a Tenured Scientist at the National Centre for Metallurgical Research (CENIM-CSIC) in Madrid. He graduated with a degree in Fine Arts Conservation in 1996 from Complutense University of Madrid, where he also obtained his PhD in 2001 with a thesis that focused on the effect of organic acids on the conservation of copper. After completing an internship at the Canadian Conservation Institute, he continued his research career at the CENIM-CSIC. He has published more than 75 research papers in international scientific journals and presented at more than 50 scientific conferences on corrosion and conservation science. His research interests focus on corrosion and protection of metallic cultural heritage, indoor corrosion, electrochemical techniques applied to conservation science, X-ray photoelectron spectroscopy (XPS) and corrosion inhibitors. Dr Cano is Assistant Coordinator of the ICOM-CC Metal Working Group and coordinator of the Spanish Network on Science and Technology for the Conservation of Cultural Heritage (TechnoHeritage). He is the Coordinator of DG Scientific and Technical Research at the Spanish Ministry of Economy and Competitiveness for the Joint Programming Initiative “Cultural Heritage and Global Change: a Challenge for Europe”, acting as the Spanish representative on its Executive Committee.