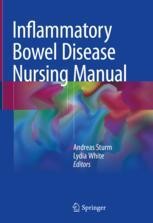 This comprehensive manual discusses the many aspects of inflammatory bowel disease (IBD), providing relevant information along with practical guidance. The reader is also directed to additional resources for extra and current information.

This book comes at a time when the number of people suffering from the two major forms of IBD, ulcerative colitis (UC) and Crohn’s disease (CD), is rising around the globe. Despite their huge impact on daily life and health economics, these diseases are not fully understood, and diagnosis and treatment remains a significant challenge. IBD nurses are increasingly recognised as key clinicians within the multidisciplinary team caring for people with IBD. Through experience and specialist knowledge IBD nurses provide timely support, advice, and treatment for people living with this unpredictable condition. IBD nurses are also well placed to liaise with the wider team, developing patient centred services which best fit their local health framework.

The combined international expertise and accessible guidance here will equip nurses, or any clinician wanting to increase their competence in IBD management. Thereby this manual aims to contribute to the optimisation of IBD care throughout the world.

Andreas Sturm is Professor of Medicine at the Charité–Universitätsmedizin Berlin, Germany, and head of the department of internal medicine and gastroenterology at the German Red Cross Hospital Berlin, Westend, an academic teaching hospital of the Charité.

His university education began in Aachen, Germany, where he gained first class honors in medicine in 1994. Since then, his medical career has involved extensive work in gastroenterology, including a research fellowship at Case Western Reserve University, Cleveland, Ohio, USA. He awarded his qualification in 2004 as an university lecturer for the field of Internal Medicine at the Charité Berlin and is since then member of the faculty. Prof. Sturm is also certified as fellow of the European Board of Gastroenterologist.

He served as coordinator of the Interdisciplinary Center for Colorectal Cancer of the Charité, president of the Inflammatory Bowel Disease working group of the German Association for Digestive and Metabolic Disorders and member and chair of the scientific committee of the European Crohn´s and Colitis Organisation (ECCO). He is a founding member and was first speaker of the German IBD Study Group (GISG). He is currently member of the Advisory Board of the Competence Network IBD and Chair of the Guideline committee of ECCO.

Dr. Sturm gained the Board certification for Internal Medicine, Gastroenterology, Nutrition (DifE) and Proctology and is certified for medical cancer therapy, GI oncology (DGVS) and inflammatory bowel disease (DGVS). He has more than 100 scientific manuscripts and book chapters published in international journals, including Gastroenterology, Journal of Clinical Investigations or Gut and has worked as a reviewer for numerous journals and organizations. He invented and started the first German IBD nursing course in 2008, still running successfully since then.

Lydia White has been the IBD nursing lead at the John Radcliffe Hospital tertiary referral unit in Oxford for over 10 years growing the nursing service to a team well integrated with the wider multidisciplinary team and supporting a the large cohort of IBD patients. She has done-post graduate education in Advanced Gastro-Intestinal Nursing at Kings College London and Oxford Brookes University and now holds a Master’s degree and independent prescribing qualification in the specialty.

Ms White has also been involved in IBD nursing at regional, national and international levels in networking, project work and speaking. She started and chaired the South Central regional Royal College of Nursing IBD group, has been part of guidelines including the European consensus statement on the role of the IBD nurse. She was also privileged to serve on the Nursing European Crohn’s and Colitis Organisational (NECCO) board for a term and has been a regular speaker in the NECCO school and related activities. At present Lydia is on a career break from Oxford to set up an IBD nursing service in New Zealand while contributing to the national role descriptors and its’ recognition as a burgeoning specialty there.