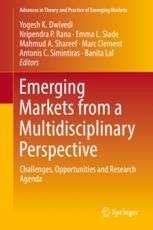 Emerging Markets from a Multidisciplinary Perspective

This book examines prominent issues in the Emerging Markets (EM) from a variety of disciplines in order to make useful societal contributions through knowledge exchange. EMs offer enormous opportunities, but realizing them is both challenging and risky due to inherent uncertainties of such markets. EM’s also have unique characteristics that makes them different from developed countries. This causes implications for both theory and practice. These markets necessitate substantial adaptations of developed theories and approaches employed in the Western world. This book investigates problems specific to emerging markets, and identifies new theoretical constructs, hypotheses (re)development, and emphasizes institutional contexts. The chapters in this book establish new conceptual and theoretical paradigms from multidisciplinary perspectives concentrated in the areas of information systems, electronic government, and digital and social media matters. The book focuses on topics in these areas such as digital enterprises, sustainability, telemedicine, and Information Communication Technology (ICT) and surveys the potential challenges and opportunities that may arise. These concepts and topics covered in this book are vital for making the global economy more equitable and sustainable.

​Yogesh K. Dwivedi is a Professor of Digital and Social Media, Director of the Emerging Markets Research Centre (EMaRC), and Director of Research in the School of Management at Swansea University, Wales, UK. His research interests are in the area of Information Systems (IS) including the adoption and diffusion of emerging ICTs and digital and social media marketing. He has published more than 100 articles in a range of leading academic journals and conferences. He has co-edited more than 15 books on technology adoption, e-government and IS theory and had them published by international publishers such as Springer, Routledge, and Emerald. He acted as co-editor of fifteen special issues; organised tracks, mini-tracks and panels in leading conferences; and served as programme co-chair of IFIP WG 8.6 Conference and Conference Chair of IFIP WG 6.11 I3E2016 Conference on “Social Media: The Good, the Bad, and the Ugly” . He is Associate Editor of European Journal of Marketing and Government Information Quarterly, Assistant Editor of JEIM and TGPPP and Senior Editor of Journal of Electronic Commerce Research.

Nripendra P. Rana is an Associate Professor in the School of Management. With an academic and professional background in Mathematics and Computer Science and with PhD in Information Systems, his current research interests focus primarily upon adoption of emerging and cutting edge technology in general and e-government, m-government, e-commerce and m-commerce systems in particular. His work has been published in leading academic journals such as European Journal of Marketing, Information Systems Frontiers, Government Information Quarterly and Computers in Human Behaviour. He developed, taught and assessed undergraduate and postgraduate modules on information systems such as Business Information Systems, Contemporary Issues in Information Systems and E-Business, Global E-Business. He has presented his research in international conferences and workshops including ECIS, PACIS, AMC, IFIP EGOV, IFIP WG 8.6, UKAIS and tGov Workshop. He also possesses a prior teaching experience in the area of computer engineering and applications at undergraduate and postgraduate levels and an experience of software development and leading successful software projects in a multinational company in India.

Emma L. Slade is a Lecturer in Digital Marketing and Deputy Director of Postgraduate Research in the School of Management. She has a PhD in Business Management, for which she explored consumer adoption of mobile payments. She also has a Master’s degree in Management with distinction and a first-class Bachelor’s degree in Criminology and Social Policy.  Emma became involved in teaching from 2011 leading seminars and tutorials as a Graduate Teaching Assistant while undertaking her PhD.  Her current teaching interests lie across digital marketing and digital business and she is hoping to expand the modules offered within these areas. Emma is an active researcher working on a variety of topics across marketing and information systems including engagement with political parties on social media, students’ cyber-slacking behaviour, and diffusion of green IT/IS. She has published articles in a number of highly regarded journals such as Psychology & Marketing, Information Systems Frontiers, Computers in Human Behaviour, and Public Management Review. A full list of her publications can be found on Google Scholar. Emma is currently supervising five PhD students in the areas of social media, electronic word-of-mouth, and pro-environmental behaviour.In 2016 Emma was selected for participation in the inaugural Digital Economy Crucible funded by EPSRC through the Challenging Human Environments and Research Impact for a Sustainable and Healthy Digital Economy (CHERISH-DE) multidisciplinary research centre. In the same year she also secured funding from British Council UAE to attend Employee Engagement for Quality Energy Efficient Workplaces and facilitate a panel session with Professor Yogesh Dwivedi about employee engagement with Green IT/S. Emma was also Programme Co-Chair of the 15th IFIP I3E Conference on “Social Media: The Good, the Bad, and the Ugly”.

Mahmud A. Shareef is currently an Associate Professor of School of Business, North South University and a visiting Professor in Carleton University, Ottawa, Canada. Previously, he was the Fellow of Social Sciences and Humanities Research Council (SSHRC), Canada to conduct research on Electronic-government. He is a Research Associate in Ontario Research Network for Electronic Commerce (ORNEC), Ottawa, Canada. He has done his PhD in Business Administration from Sprott School of Business, Carleton University, Ottawa, Canada with the highest Senate Medal. He received his graduate degree from both the Institute of Business Administration, University of Dhaka, Bangladesh in Business Administration (MBA, Finance) and Carleton University, Ottawa, Canada in Civil Engineering (M.Eng.). Before that, he has completed his undergraduate degree from Bangladesh University of Engineering & Technology (BUET). He is the principal author of both books. He has presented several seminal papers in management seminars in USA, Canada, Switzerland, and UK. Mr. Mahmud is the recipient of more than 15 academic awards including 2 Best Research Paper Awards for the best journal and conference papers from UK and Canada. He was the guest Editor (Special Issue) of International Journal of Electronic-Government Research (IJEGR) which is published from UK. He has extensive research experience in the fields like Information technology management, Consumer behavior management, Organizational reformation, Electronic-government, Electronic-commerce, and Identity theft. He has published more than 50 research papers addressing organizational theories, adoption and quality of Electronic-government and Electronic-commerce, and other topical management issues in different international refereed conference proceedings and international journals (All are from North America and Europe). He is the principal author/editor of the refereed books Proliferation of the Internet Economy: E-Commerce for the Global Adoption, Resistance and Cultural Evolution, Stakeholder Adoption of E-Government Services: Driving and Resisting Factors and E-Government Service Maturity and Development: Cultural, Organizational and Technological Perspectives published by Information Science Reference, IGI Global Publications, USA. He is also the coauthor of several book chapters of refereed books published from USA. Recently, he has finished writing/editing the refereed book Transformational Government through eGov: Socioeconomic, Cultural, and Technological Issues, Emerald Group Publishing Limited, UK named  which is published from UK in 2012 April. At present, he is editing/writing another book Public Administration Reformation: Market Demand from Public Organizations which will be published by Routledge, Taylor & Francis, New York, NY 10017, USA (To be Published in 2013). He has presented several seminal papers at management seminars in the USA, Canada, and the UK. He received more than 15 academic awards including two Best Research Paper Awards for the best journal and conference papers from the UK and Canada. He has  also edited a special issue of International Journal of Electronic Government Research as the guest editor.

Marc Clement was born in Llanelli, Wales. He graduated with a First-Class Honours degree in Physics from Swansea University and a PhD in Laser Physics from Swansea University with the research undertaken at the Rutherford Laboratory. Marc then gained a Fellowship from the Royal Society to study at the Centre d'Etudes Nucléaires de Saclay, in Paris. He has held several senior academic positions including being the Vice Chancellor of the University of Wales for six years before returning to become Executive Chair in the Institute of Life Science at the College of Medicine, Swansea University. In 2014 Marc was invited to become Vice President of Swansea University with a specific role of developing major strategic projects; and more recently in October 2015, Marc was appointed as Dean of the School of Management, Swansea University. Marc has also held several public appointments serving on and chairing committees on behalf of Welsh Government and representing Wales on the UK Board of the National Endowment for Science, Technology and the Arts (NESTA). Marc is an entrepreneur having founded several businesses and is the named inventor of many patents in the field of medical devices.

Antonis Simintiras joined GUST in August 2015 as the MBA Program Director, and in 2016 was put in charge as the Dean of the College of Business Administration. He completed his degree and post graduate studies in the USA and UK, and began his career as a Sales Manager for a Greek FMCG company.In 1991, he started his first academic job as a Lecturer in Marketing at Swansea University. Four years later he moved to the Open University, as Reader in Marketing, for two years, and in 1998 returned to Swansea University as a Marketing Professor– a position he held until 2015.Over the years his research interests have been in the areas of personal selling and sales management, cross-cultural research methodology, and consumer behavior. His work has appeared in many academic journals and he has even presented his findings at several international conference proceedings. Professor Simintiras has also co-authored a book on Global Sales Management.Over the years, he has held several visiting professorial appointments at universities in France, Spain, Austria, Greece, Finland, USA, and China, and acted as a consultant for various companies and government organizations. Moreover, he has held many administrative roles, including serving as the Dean of the Business School at Swansea University, and as Deputy Dean responsible for Internationalization.

Banita Lal is a Senior Lecturer at Nottingham Business School at Nottigham Trent University. Currently, Dr Lal's research interests are within the areas of: the usage of mobile technologies by workers / homeworkers and the influence on home-work boundaries, factors affecting the adoption of broadband technology in different countries, including developing nations, and the usage of virtual environments by organisations.