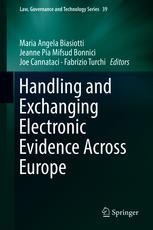 This volume offers a general overview on the handling and regulating electronic evidence in Europe, presenting a standard for the exchange process. Chapters explore the nature of electronic evidence and readers will learn of the challenges involved in upholding the necessary standards and maintaining the integrity of information. Challenges particularly occur when European Union member states collaborate and evidence is exchanged, as may be the case when solving a cybercrime. One such challenge is that the variety of possible evidences is so wide that potentially anything may become the evidence of a crime. Moreover, the introduction and the extensive use of information and communications technology (ICT) has generated new forms of crimes or new ways of perpetrating them, as well as a new type of evidence.

Contributing authors examine the legal framework in place in various EU member states when dealing with electronic evidence, with prominence given to data protection and privacy issues. Readers may learn about the state of the art tools and standards utilized for treating and exchanging evidence, and existing platforms and environments run by different Law Enforcement Agencies (LEAs) at local and central level. Readers will also discover the operational point of view of LEAs when dealing with electronic evidence, and their requirements and expectations for the future. Finally, readers may consider a proposal for realizing a unique legal framework for governing in a uniform and aligned way the treatment and cross border exchange of electronic evidence in Europe.The use, collection and exchange of electronic evidence in the European Union context and the rules, practises, operational guidelines, standards and tools utilized by LEAs, judges, Public prosecutors and other relevant stakeholders are all covered in this comprehensive work. It will appeal to researchers in both law and computer science, as well as those with an interest in privacy, digital forensics, electronic evidence, legal frameworks and law enforcement.
Show all
About the authors

Maria Angela Biasiotti is a Researcher at ITTIG-CNR. She has a degree in Law (1999) and holds a Ph.D. in Information Technologies and Law (2008) at the Faculty of Law, Bologna University. In 2001 she started her activity at the Institute of Legal Information Theory and Techniques (CNR-ITTIG).She collaborates also with the European University Institute. Since 2012 she is a member of the Ordinatory Committee of the FORESIGHT S&T Project of the National Research Council of Italy. Starting from March 2014 she coordinates the EVIDENCE – European Informatics Data Exchange Framework for Courts and Evidence Project and follow-up of this with the EVIDENCE2e-Codex Project (2018-2019). She collaborates in several other European Projects:  ESSENTIAL (Evolving Security Science Through Networked Technologies, Information Policy and Law) H2020-MSCA-ITN 2016- European Joint Doctorate; CARISMAND (Culture And RISk Management in Man-made And Natural Disasters; CITYCOP (Citizen Interaction Technologies Yield Community Policing) ; MAPPING (Managing Alternatives for Privacy, Property and INternet Governance); SMART ( Scalable Measures for Automated Recognition Technologies EU project); RESPECT (Rules. Expectations & Security through Privacy-Enhanced Convenient Technologies EU project), CARE ( Citizens Consular Assistance Regulation in Europe); Multilingual thesauri Matching Project financed by the OPOCE; Caselex project (financed by the European Commission under the e-Content and later e-Ten program);Norme-in-Rete project realizing and ABC for the Law helping users of the portal to access in a conscious way legal contents.