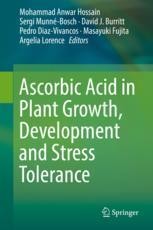 Ascorbic acid (AsA), vitamin C, is one of the most abundant water-soluble antioxidant in plants and animals. In plants AsA serves as a major redox buffer and regulates various physiological processes controlling growth, development, and stress tolerance. Recent studies on AsA homeostasis have broadened our understanding of these physiological events. At the mechanistic level, AsA has been shown to participate in numerous metabolic and cell signaling processes, and the dynamic relationship between AsA and reactive oxygen species (ROS) has been well documented. Being a major component of the ascorbate-glutathione (AsA-GSH) cycle, AsA helps to modulate oxidative stress in plants by controlling ROS detoxification alone and in co-operation with glutathione. In contrast to the single pathway responsible for AsA biosynthesis in animals, plants utilize multiple pathways to synthesize AsA, perhaps reflecting the importance of this molecule to plant health. Any fluctuations, increases or decreases, in cellular AsA levels can have profound effects on plant growth and development, as AsA is associated with the regulation of the cell cycle, redox signaling, enzyme function and defense gene expression. Although there has been significant progress made investigating the multiple roles AsA plays in stress tolerance, many aspects of AsA-mediated physiological responses require additional research if AsA metabolism is to be manipulated to enhance stress-tolerance. This book summarizes the roles of AsA that are directly or indirectly involved in the metabolic processes and physiological functions of plants. Key topics include AsA biosynthesis and metabolism, compartmentation and transport, AsA-mediated ROS detoxification, as well as AsA signaling functions in plant growth, development and responses to environmental stresses. The main objective of this volume is therefore to supply comprehensive and up-to-date information for students, scholars and scientists interested in or currently engaged in AsA research.

Mohammad Anwar Hossain is a professor in the Department of Genetics and Plant Breeding, Bangladesh Agricultural University, Mymensingh-2202, Bangladesh. He received his B.Sc. in agriculture and M.S. in genetics and plant breeding from Bangladesh Agricultural University, Bangladesh. He also received an M.S. in agriculture from Kagawa University, Japan, in 2008 and a Ph.D. in abiotic stress physiology and molecular biology from Ehime University, Japan, in 2011 through Monbukagakusho Scholarship. As a JSPS postdoctoral researcher, he has worked on isolating low-phosphorus stress-tolerant genes from rice at the University of Tokyo, Japan, in 2015–2017. His current research interests include the isolation and characterization of abiotic stressresponsive genes and proteins; physiological and molecular mechanisms of abiotic stress response and tolerance with special reference to oxidative stress, antioxidants and methylglyoxal metabolism and signalling; and generation of stress-tolerant and nutrient-efficient plants through breeding and biotechnology and cross stress tolerance in plants. He has over 50 peer-reviewed publications and has edited 7 books, including this one, published by CRC Press, Springer, and Elsevier.

Sergi Munné-Bosch is a full professor in the Department of Evolutionary Biology, Ecology and Environmental Sciences, University of Barcelona, Spain. He received his B.Sc. in biology and his Ph.D. in plant biology from the University of Barcelona. His research interests include antioxidants, stress and senescence in plants, including research not only in plant physiology but also in plant ecophysiology and agrifood biotechnology. Main interests include the biosynthesis and function of antioxidant vitamins, plant hormones and secondary metabolites, as well as seed dormancy  and germination, leaf, flower and whole-plant senescence and fruit ripening. He is also interested in plant responses to drought and adaptation to extreme temperatures, as well as the ecophysiology of invasive plants. He has co-authored 180 peerreviewed SCI-indexed journal articles, 17 book chapters and 3 books. He is editor-in-chief of the journal Environmental and Experimental Botany  from Elsevier.

David J. Burritt is an associate professor in the Department of Botany, the University of Otago, Dunedin, New Zealand. He received his B.Sc. and M.Sc. (Hons) in botany and his Ph.D. in plant biotechnology from the University of Canterbury, Christchurch, New Zealand. His research interests include oxidative stress and redox biology, plant-based foods and bioactive molecules, plant breeding and biotechnology, cryopreservation of germplasm and the stress biology of plants, animals and algae. He has over 100 peer-reviewed publications and has edited 3 books for Springer and 2 for Elsevier.

Pedro Diaz-Vivancos is a professor in the Department of Plant Biology, Murcia University (Murcia, Spain). He is also linked to the Plant Breeding Department at CEBAS-CSIC (Murcia, Spain). He received his B.Sc. in biological sciences from the University of Murcia and his Ph.D. in 2007 in agricultural and food technology from the University of Cartagena (Spain). He has worked during the period of 2008–2009 at Newcastle and Leeds Universities (UK) as a postdoctoral scientist on the role of glutathione in the regulation of cell proliferation and plant development. His main research interests are the study of the role of the antioxidative metabolism in plant development and in plant stress responses, including the induction of tolerance against environmental stresses in plum plants by increasing their antioxidant capacity by genetic engineering. He has over 40 peer-reviewed publications and 2 book chapters. He has edited two book volumes for Springer including this one.

Masayuki Fujita is a professor in the Department of Plant Science, Faculty of Agriculture, Kagawa University, Kagawa, Japan. He received his B.Sc. in chemistry from Shizuoka University, Shizuoka, and his M.Agr. and Ph.D. in plant biochemistry from Nagoya University, Nagoya, Japan. His research interests include physiological, biochemical and molecular biological responses based on secondary metabolism in plants under biotic (pathogenic fungal infection) and abiotic (salinity, drought, extreme temperatures and  heavy metals) stresses, phytoalexin, cytochrome P-450, glutathione S  transferase, phytochelatin and redox reaction and antioxidants. He has over 150 peer-reviewed publications and has edited 2 books for Springer including this one.

Argelia Lorence is the James and Wanda Lee Vaughn endowed professor in the Department of Chemistry and Physics at Arkansas State University (A-State) in Jonesboro, Arkansas, USA, where she also leads the A-State Plant Phenomics Facility. Lorence received a B.Sc. in biochemical engineering from Universidad Autónoma Metropolitana, Iztapalapa (UAM-I), Mexico. She earned M.S. and Ph.D. degrees in biotechnology from the Institute of Biotechnology of Universidad Nacional Autónoma de Mexico (UNAM). Prior to joining A-State, Lorence was a postdoctoral research associate at Texas A&M and at Virginia Tech. The most significant contribution Prof. Lorence has made to plant sciences has been the discovery of a novel biosynthetic pathway for ascorbate that involves myo inositol as main precursor. Her laboratory uses Arabidopsis to better understand the role of various subcellular pools of ascorbate in plant physiology. In addition to Arabidopsis, her current models of study include rice, soybean, tobacco and maize. Her research interests include ascorbate metabolism, redox biology, plant phenomics and the study of plant’s responses to stresses using high-throughput phenotyping approaches to develop crops with enhanced resilience. She has over 50 peer-reviewed publications and 3 patents and has edited special issues of peer-reviewed journals (e.g. Functional Plant Biology) and 3 books, one published by Humana Press and two published by Springer including this one.
Show all