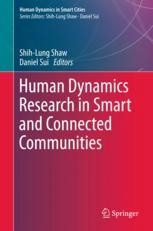 This book addresses how accelerating advances in information and communication technology, mobile technology, and location-aware technology have fundamentally changed the ways how social, political, economic and transportation systems work in today’s globally connected world. It delivers on many exciting research questions related to human dynamics at both disaggregate and aggregate levels that attract the attention of researchers from a wide range of disciplines. Human Dynamics Research involves theoretical perspectives, space-time analytics, modeling human dynamics, urban analytics, social media and big data, travel dynamics, privacy issues, development of smart cities, and problems and prospects of human dynamics research. This book includes contributions on theoretical, technical, or application aspects of human dynamics research from different disciplines. Appealing to researchers, scholars and students across a wide range of topics and disciplines including: urban studies, space-time, mobility and the internet, social media, big data, behavioral geography and spatio-temporal-network visualization, this book offers a glimpse at the cutting edge of research on human dynamics.

Shih-Lung Shaw is Alvin and Sally Beaman Professor and Arts and Sciences Excellence Professor of Geography at the University of Tennessee, Knoxville.  He also serves as the interim associate provost for international education at the University of Tennessee, Knoxville.  He received his B.S. degree from the National Taiwan University and his M.A. and Ph.D. degrees from the Ohio State University.  His research interests cover geographic information science (GIScience), transportation geography, time geography, GIS for transportation (GIS-T), and space-time analytics of human dynamics.  His recent research has focused on space-time analytics of human activities and interactions in a hybrid physical-virtual world based on various types of individual tracking data such as cell phone data, online social media data, vehicle tracking data, travel-activity survey data, and population migration data.  His research has led to the development of a space-time GIS for representation, analysis, and visualization of individual activities and interactions in a hybrid physical-virtual space.  Dr. Shaw is a Fellow of the American Association for Advancement of Science (AAAS).  He also received the Edward L. Ullman Award for Outstanding Contributions to Transportation Geography from the Association of American Geographers (AAG) and served as the Head of the Department of Geography at the University of Tennessee, Knoxville.

Daniel Sui is an Arts and Sciences Distinguished Professor and Professor of Geography, Public Affairs, Public Health, and Urban/Regional Planning at the Ohio State University (OSU).  He also serves as the Division Director for Social and Economic Sciences(SES) at the U.S. National Science Foundation.  Prior his current appointment, professor Sui served as Chair of Geography (2011-2015) and as Director of the Center for Urban & Regional Analysis (CURA) (2009-2012) at OSU.  Before joining the faculty of OSU in July 2009, Daniel Sui was a professor of geography (1993-2009) and holder of the Reta A. Haynes endowed chair (2001-2009) at Texas A&M University.  He holds a B.S. (1986) and M.S. (1989) from Peking University and Ph.D. from University of Georgia (1993).  His research current interests include GIScience and cartographic theory, location-based social media, open/alternative GIS, Deep Web/Darknet, and legal/ethical issues of using geospatial technology in society. Sui was a 2009 Guggenheim Fellow, 2006 winner of the Michael Breheny Prize for best paper in Environment and Planning, and 2014 recipient of the distinguished scholar award from the Association of American Geographers. Sui was also  the 2015 Public Policy Scholar in residence at the Woodrow Wilson International Center for Scholars. He served on the U.S. National Mapping Science Committee for two terms (2007-2013) and currently serves as editor-in-chief for GeoJournal.