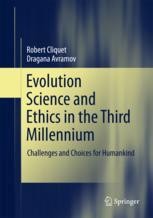 Evolution Science and Ethics in the Third Millennium

Challenges and Choices for Humankind

The book aims to revitalise the interdisciplinary debate about evolutionary ethics and substantiate the idea that evolution science can provide a rational and robust framework for understanding morality. It also traces pathways for knowledge-based choices to be made about directions for future long-term biological evolution and cultural development in view of adaptation to the expected, probable and possible future and the ecological sustainability of our planetary environment The authors discuss ethical challenges associated with the major biosocial sources of human variation:  individual variation, inter-personal variation, inter-group variation, and inter-generational variation. This book approaches the long-term challenges of the human species in a holistic way. Researchers will find an extensive discussion of the key theoretical scientific aspects of the relationship between evolution and morality. Policy makers will find information that can help them better understand from where we are coming and inspire them to make choices and take actions in a longer-term perspective. The general public will find food for thoughts.

Robert Cliquet is emeritus professor in anthropology and social biology at the University of Ghent, and honorary general director of the Population and Family Study Centre (CBGS) in Brussels, a Flemish governmental scientific institute. He has directed or participated in several international research projects in particular in the domain of reproductive behaviour, and population and family development and policy in general. As a consultant to the United Nations and governmental expert, he was involved in the preparation of the UN world population conferences in 1974, 1984 and 1994. In 1999 he acted as chairman of the United Nations Commission on Population and Development. Between 2000 and 2002 he chaired the European Population Committee (CAHP) of the Council of Europe. During many years he was involved in activities of adult education. He has published close to 200 scientific papers and several books on population and family issues and on global and regional population policy issues.

Dragana Avramov is currently director of Population and Social Policy Consultants in Brussels. She was formerly director of the Demographic Research Centre, Institute of Social Sciences, University of Belgrade. She has degrees in sociology, cultural anthropology and journalism. She has more than 20 years of experience as researcher in social sciences and humanities. She served as expert for the European Commission, Council of Europe and United Nations, and was evaluator, reviewer, rapporteur, chair of panels and independent observer for the European Commission, and several regional and national scientific evaluation organisations in Europe. She was active in scientific associations and international non-governmental organisations and contributed to grass-root and voluntary organisations working with disadvantaged groups. Her publications include 14 books and over 70 scientific articles in the domain of sociology, demography, population and development, public policies, scientific, policy and social impact of research, and foresight studies.