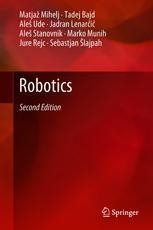 This book introduces readers to robotics, industrial robot mechanisms, and types of robots, e.g. parallel robots, mobile robots and humanoid robots. The book is based on over 20 years of teaching robotics and has been extensively class tested and praised for its simplicity.

It addresses the following subjects: a general introduction to robotics; basic characteristics of industrial robot mechanisms; position and movement of an object, which are described by homogenous transformation matrices; a geometric model of robot mechanisms expanded with robot wrist orientation description in this new edition; a brief introduction to the kinematics and dynamics of robots; robot sensors and planning of robot trajectories; fundamentals of robot vision; basic control schemes resulting in either desired end-effector trajectory or force; robot workcells with feeding devices and robot grippers.

This second edition has been expanded to include the following new topics: parallel robots; collaborative robots; teaching of robots; mobile robots; and humanoid robots. The book is optimally suited for courses in robotics or industrial robotics and requires a minimal grasp of physics and mathematics.

The 1st edition of this book won the Outstanding Academic Title distinction from the library magazine CHOICE in 2011.

Matjaž Mihelj (Ph.D., University of Ljubljana, 2002) is a Full Professor at the University of Ljubljana. His research interests are in human-robot interaction, rehabilitation robotics, and wearable sensors. He has authored or coauthored over 40 journal publications and 9 monographs, and holds 3 patents. His contributions have been recognized with several national and international awards.

Jadran Lenarčič (Ph.D., University of Ljubljana, 1986) is currently Director of the J. Stefan Institute, Ljubljana. His basic research interests include robotics, robot kinematics, biorobotics and humanoid robotics. He has edited a series of books on Advances in Robot Kinematics, and is a member of both the Slovenian Academy of Engineering and Accademia delle scienze di Bologna.

Aleš Ude (Ph.D., University of Karlsruhe, 1995) is Head of the Department of Automatics, Biocybernetics, and Robotics at J. Stefan Institute, Ljubljana, and an Associate Professor at the University of Ljubljana. His research interests include robot sensorimotor learning, robot vision, humanoid robotics, and cognition.

Sebastjan Šlajpah (Ph.D., University of Ljubljana, 2015) is a Teaching Assistant for courses in the fields of robotics, robot control, and human-robot interaction. His research is focused on wearable sensors, haptics, collaborative robotics, and robot control.

Jure Rejc (Ph.D., University of Ljubljana, 2008) is a researcher and Teaching Assistant for robotics and embedded systems. In addition, he works to develop robot-based applications and solutions for high-precision industrial measurements.