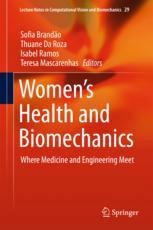 Where Medicine and Engineering Meet

This book focuses on particular mental and physical aspects of women’s health, presenting topics concerning the pelvis and pelvic floor dysfunction and the breast during a woman’s life, such as rehabilitation for pelvic and breast disorders, and the benefits of biomechanical analysis in treating these conditions. With each chapter providing a brief survey of a major research area related to the theme, the book offers an integrated overview of topics such as the bio-psycho-social model of women’s health, pelvic floor evaluation in sports, the breast, pregnancy and delivery. It is a valuable resource for a wide range of readers, including researchers, graduates and professionals.

Sofia Brandão RT, PhD is a radiographer at the CHSJ-EPE. She received her BSc and Graduation in Radiological Sciences in the Oporto Polytechnic Institute, a PostGrad and her PhD in Biomedical Engineering by the Faculty of Engineering, and a MSc in Medical Informatics by the Faculty of Medicine, University of Oporto. For the past 13 years, she is an Assistant Professor at a private Health Sciences School (CESPU,Crl).The main research interest is magnetic resonance imaging (MRI). She has participated in different PhD and Post-doc Projects in the context of the MR protocol optimization and acquisition. She has received a Training Scholarship at the University Hospital of Tübingen, and several awards in national and international conferences. She has over 23 peer-reviewed publications, including a book chapter. She performed more than 30 talks on technical aspects of clinical MRI and computational analysis of the pelvic floor. Thuane Da Roza PT, PhD is Professor of Obstetrics and Gynecology at the Santa Catarina State University (UDESC) with an appointment as Staff in the Biomechanics Laboratory of Health Sciences and Sports Center. She received her BSc and Graduation in Physiotherapy Science by the College of Health and Sport Science of the UDESC, an MSc and PhD in Physical Activity and Health by the Faculty of Sport at the University of Porto. She is currently completing a postdoctoral fellowship at the College of Health and Sport Science, in Brazil, in conjunction with the Faculty of Engineering of the University of Oporto, Portugal. Da Roza has over 30 peer-reviewed publications, has participated in a book chapter and performed over 50 lectures regarding pelvic floor function and biomechanics. The focus of her 10-years research career has been on pelvic floor structure and function, mainly through computational modeling and with female athletes. In addition, she was the first to demonstrate the effect of a comprehensive pelvic floor muscles training program on urinary incontinence symptoms in sports women. Isabel Maria Ramos, MD, PhD, received her MD degree from the Faculty of Medicine of the University of Oporto. In 1989, Professor Ramos completed a fellowship at Yale University and received her PhD from the University of Oporto. Since 1990 she is the Director of the Radiology Department and since 2007 accumulates with management functions. Professor Ramos is Full Professor at the Faculty of Medicine since 2001. She is also a member of the Portuguese Medical Academy. Professor Ramos was already (Vice-) and President of the Portuguese Society of Radiology, and a member of the Board (and President) of the Portuguese College of Radiology, as well as a member of the Board of the European Association of Radiology Education Committee. Professor Ramos is (co)-author of more than 200 papers published in portuguese and international Journals, 9 chapters in Radiology Books and performed more than 300 lectures. In 2016 she was awarded the medal of merit of the Portuguese Order of Physicians. Teresa Mascarenhas Saraiva, MD, PhD, received her MD and PhD degree from the Faculty of Medicine of the University of Oporto. She works since 1992 in the Department of Obstetrics and Gynecology of the Centro Hospitalar de São João-EPE, and since 2006 and she is Head of Department and Associated Professor of the Faculty of Medicine.Professor Mascarenhas was already the European Representative, Member of the Scientific Board, and President of the International Urogynecological Association (IUGA), and was also a member of the Board of the European Urogynacological Association (EUGA). She was also a founder of the Portuguese Section of Urogynecology of the Portuguese Society of Gynecology. She has developed relevant research work, with several international and national awards. She is (co)-author of more than 200 publications, including a book chapter and scientific papers in national or international journals, besides more than 400 conference presentations. She has also been (co-) supervisor of MSc, PhD and Post-doc thesis in her research field, and is Member of the Editorial Board of two International Journals.