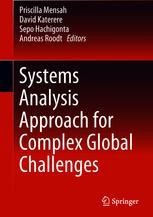 This book, which contains a collection of review articles as well as focus on evidence-based policy making, will serve as a valuable resource not just for all postgraduate students conducting research using systems analysis thinking but also for policy makers. To our knowledge, a book of this nature which also has a strong African focus is currently not available. The book examines environmental and socio-economic risks with the aim of providing an analytical foundation for the management and governance of natural resources, disasters, addressing climate change, and easing the technological and ecological transitions to sustainability. It provides scientific and strategic analysis to better understand the dynamics of future energy transitions, their main driving forces, enabling factors, barriers, as well as their consequences for the social, economic and environmental dimensions of human wellbeing. Science-based policy advice is achieved through an integrated assessment and modeling of how to simultaneously address the major energy policy challenges in the areas of environment (climate change and air pollution), energy poverty (or access to affordable and clean energy for the poor), energy security and reliability. It also aims to improve our understanding of ecosystems and their management in today’s changing world—in particular, the current state of ecosystems, and their ecological thresholds and buffering capacities. It provides support for policy makers in developing rational, realistic and science-based regional, national and global strategies for the production of fuel, food and fibre that sustain ecosystem services and safeguard food security. Finally, it addresses the human development dimension of global change based on comprehensive studies on the changing size and composition of human populations around the world by analyzing both their impacts and the differential vulnerabilities by age, gender and level of education.

Dr Priscilla Mensah is Director in the Human and Infrastructure Capacity Development Directorate of the National Research Foundation (NRF) of South Africa. She joined the University of the Free State in 2012 where she held a number of positions including Deputy-Director: International Academic Programmes and Deputy Director of the Postgraduate School. In 2013, she was awarded a Higher Education Leadership and Management LEAD Fellowship. She served as Director for the three consecutive summer schools of the Southern African Young Scientist Summer Programme (SA-YSSP) in Applied Systems Analysis hosted at the University of the Free State from 2012-2015. She has extensive knowledge of South Africa’s Higher Education and Training landscape and the National System of Innovation. She is a specialist in systems analysis with specific emphasis on science and policy within South Africa and beyond. In addition, she is a committee member of South Africa’s National Member Organisation (NMO) of the International Institute of Applied Systems (IIASA). The work of this committee contributes to the national strategy of developing systems analysis capacity and establishing systems analysis as a research approach in the country. Priscilla holds Masters and Doctoral degrees in Chemistry from the University of Cape Town. Following the completion of her doctoral degree, she joined the Unit for Drug Research and Development at the North-West University as a postdoctoral fellow, where her research focused on the drug delivery properties.

Dr Sepo Hachigonta is Director of Strategic Partnerships at the NRF of South Africa. He has extensive work experience in trans-disciplinary fields and the regions’ science, technology and policy landscape. Prior to joining the NRF, he was a programme manager at FANRPAN, a regional policy analysis network on food security and agricultural based in Pretoria. He has published widely in environmental and agriculture systems, with a specific focus on research to policy interface. Dr Hachigonta has played a significant role in developing systems analysis expertise in the region through various programmes including the Southern African Systems Analysis Centre (SASAC), a multi-year initiative that takes cognisance multi-level systems analysis capacity interventions, and a comprehensive approach to policy related activities in southern Africa. Having participated in the 2007, Young Scientist Summer Programme, at IIASA, Dr Hachigonta has remained an active member of the IIASA alumni serving as a lead national coordinator for IIASA engagements in South Africa. Dr Hachigonta holds a Masters and Doctoral degrees in Environmental Science from the University of Cape Town.

Prof David Katerere is  a full Professor of Pharmaceutical Science at Tshwane University of Technology (TUT) where he teaches, conducts research and consults.  He has worked for the University of Pretoria, Farmovs-Parexel CRO, SA Medical Research Council and Hwesa Consulting. His areas of interest and expertise are pharmaceutical and analytical chemistry, regulatory science and IKS pharmacognosy. He was involved in the South African Young Scientists Summer Programme (SA-YSSP) as a trainer and resource person on Scientific and Proposal Writing, which is something that he is passionate about. In the past he was an expert advisor / trainer on scientific matters to the South African Medical Research Council (MRC) Grants and Scholarships Division (GASD) and reviewer of grant proposals for the National Research Foundation (NRF) and Medical Research Council (MRC). David has been an official trainer / mentor for the SA Medical Research Council’s Research Capacity Programmes including the Emerging Scientists programmes and the Institutional Strengthening Initiatives. He was recently involved in writing and delivering e-learning modules for the Association of Commonwealth Universities (ACU’s) Structured Training for African Researchers (STARS). This course was initially delivered to over 20 universities in 10 African countries via youtube and webcasting. David holds a BPharm (Hons) degree from the University of Zimbabwe and a Doctoral degree in Pharmaceutical Science from the University of Strathclyde, Scotland.

Prof Andreas Roodt is a distinguished professor at the University of the Free State (UFS) and leads the Inorganic Chemistry research group consisting of four senior colleagues and 20 PhD and MSc students and post-doctoral fellows. His prime research focus is on complete reaction mechanisms in Coordination Chemistry systems and chemical processes with application in homogeneous catalysis, radiopharmaceuticals and separation technology. Therein he utilises X-ray crystallography, reaction kinetics, equilibrium and time resolved spectroscopy at ambient, low and high temperature and pressure, and Computational Chemistry. He actively collaborates with South African industries such as SASOL Technology, the Nuclear Energy Corporation of South Africa and Pet Labs Pharmaceuticals, and international research groups in Switzerland, Sweden, Germany, Russia, Croatia, India, Tunisia and the USA. As immediate past president of the European Crystallographic Association (35 member countries across Europe, the Middle East and Africa) he has as passion for the expansion of science in Africa via crystallography also using a systems approach. He is a Fellow of the Royal Society of Chemistry, international elected member of the Swedish Physiographic Society as well as the Ruđer Bošković Institute in Zagreb, Croatia. He was the winner of the South African Department of Trade & Industry Award for the best THRIP research programme focusing on Small and Medium Enterprise Development in 2010 and served as chairperson of the Organising Committees of more than fifteen international conferences in South Africa and abroad. He presented more than 90 lectures at international venues and has made more than 25 international research visits as visiting professor to universities in Switzerland and Sweden. He regularly reviews papers for more than ten international chemistry journals, served on the editorial boards of three international scientific journals and has published more than 300 scientific papers and chapters in books (Scopus H-index of 32). He served as dean for the three consecutive summer schools of the Southern African Young Scientist Summer Programme (SA-YSSP) in Applied Systems Analysis hosted at the University of the Free State from 2012-2015. Andreas holds a Doctoral degrees in Chemistry from the University of the Free State.