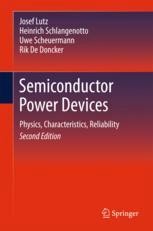 This book discusses semiconductor properties, pn-junctions and the physical phenomena for understanding power devices in depth. Working principles of state-of-the-art power diodes, thyristors, MOSFETs and IGBTs are explained in detail, as well as key aspects of semiconductor device production technology. Special peculiarities of devices from the ascending semiconductor materials SiC and GaN are discussed.

This book presents significant improvements compared to its first edition. It includes chapters on packaging and reliability. The chapter on semiconductor technology is written in a more in-depth way by considering 2D- and high concentration effects. The chapter on IGBTs is extended by new technologies and evaluation of its potential. An extended theory of cosmic ray failures is presented. The range of certain important physical relationships, doubted in recent papers for use in device simulation, is cleared and substantiated in this second edition.

Josef Lutz studied Physics at the University of Stuttgart. He invented the Controlled Axial Lifetime (CAL) diode and holds several patents. In 1999 he graduated as Ph.D in electrical engineering at the University of Ilmenau. Since August 2001 he is a Professor for Power Electronics and Electromagnetic Compatibility at TU Chemnitz, Germany. He is the consulting Director of the PCIM, member of four international Program Committees and member of the Editorial Advisory Board of Microelectronics Reliability. He was awarded with the degree of Honorable Professor by the North Caucasus State University Stavropol, Russia, in 2005.

Heinrich Schlangenotto received the Ph.D. degree in theoretical physics at the University of Münster. In 1966 he joined the Research Institute of AEG-Telefunken in Frankfurt which in 1988 passes to Daimler-Benz. Working on the physics underlying the operation modes of semiconductor power devices, he improved the description of forward conduction based on a new insight in the spatial distribution of recombination. Investigating the injection and temperature dependence of radiative recombination, which is used in analysing device operation, he finds an important participation of excitons even near room temperature. To improve the dynamic behaviour of rectifier diodes he invented the fast, soft recovery SPEED-diode. He gave the first quantitative description of the dynamical avalanche mechanism limiting fast switching. From 1991 to 2001 he held a lecture on power devices at the TU Darmstadt, Germany.

Uwe Scheuermann joined Semikron in Nuremberg, Germany, after completing his Ph.D. in semiconductor physics in 1990. After spending 5 years with the development of diode and thyristor chips, he changed his focus to the development of power modules. He has been involved in the development of the advanced power module families without base plates and the implementation of new packaging concepts like spring contacts. He has published more than 50 papers and holds several patents in the field of packaging technology. Today, he is at Semikron responsible for the reliability of components. He is a member of the board of directors of the PCIM Europe and of the program committee of the CIPS. In 2014 he was appointed as honorary professor for electrical engineering at the Friedrich-Alexander-University of Erlangen, where he lectured since 2006.

Rik De Doncker received his degree of Doctor in Electrical Engineering from the Katholieke Universiteit Leuven, Belgium in 1986. During 1987 he was appointed Visiting Associate Professor at the University of Wisconsin, Madison. In 1988, he was employed as a General Electric Company fellow at the microelectronic center IMEC, Leuven, Belgium. In Dec. 1988, he joined the General Electric Company at the Corporate Research and Development Center, Schenectady, NY where he led research on drives and high power soft-switching converters, ranging from 100 kW to 4 MW, for aerospace, industrial and traction applications. In 1994 he joined Silicon Power Corporation (formerly GE-SPCO) as Vice President Technology where he worked on high power converter systems and MTO devices and was responsible for the development and production of world’s first 15 kV medium voltage transfer switch. Since Oct. 1996 he became professor at the RWTH-Aachen, where he leads the Institut für Stromrichtertechnik und Elektrische Antriebe (ISEA).
Show all