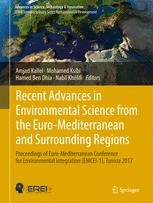 Dr. Kallel holds a B.Eng. in Georesources and Environment (1998) from the University of Sfax (Tunisia), a M.Sc. and a Ph.D. degree in Georesources and Environment (2004) from Hokkaido University (Japan). He joined Venture Business Laboratory (VBL) at Akita University, Japan (2005–2006) as a researcher focusing on refining and recycling technologies for recovering of rare elements from natural and secondary sources. Back in Tunisia, he started working at the University of Gabes from 2006–2011 where he contributed to the elaboration of teaching programs at the Higher Institute of Water Sciences and Technologies of Gabes. Since 2011, he has started lecturing at the Sfax National School of Engineering (University of Sfax, Tunisia). There, he has been also involved in various research projects related to Environmental Geology and Environmental Geotechnics. In addition, Dr. Kallel is involved as a consultant in urban and environmental projects for the Ministry of Environment and Sustainable Development in Tunisia. In 2017 Dr. Kallel completed his Habilitation (HDR) in Environmental Science at the University of Sfax (Tunisia). He has organized many prestigious workshops, seminars and international conferences. Currently, he is supporting the editorial board of the Euro-Mediterranean Journal for Environmental Integration (Springer). In 2016 Dr. Kallel joined the Arabian Journal of Geosciences (Springer) as an Assistant Editor supporting the Editor-in-Chief.

Dr. Ksibi is the Director of the High Institute of Biotechnology at the University of Sfax (Tunisia). Dr. Ksisi obtained his M.Sc. (1989) and PhD (1993) degrees in Applied Chemistry from the University of Poitiers (France). He also gained the Habilitation (HDR) in Chemistry from the University of Sfax, Tunisia (2003). Afterwards, he received a one-year postdoctoral research fellowship at the National Institute of Scientific and Technical Research (Tunisia, 1995) and then was appointed as an Adjunct Professor in Chemistry (1996), Assistant Professor (1999), Associate Professor (2004) and as a full Professor of Chemistry (2009) at the University of Sfax, Tunisia. His research focuses on chemicals in the environment, water and wastewater treatment and reuse. He developed new methods for toxicity assessment of water containing various pollutants (dyes, phenolic and pharmaceutical compounds, pulp and paper mills pollute water, domestic wastewater, …etc.) after applying different wastewater treatment techniques. Dr. Ksibi has been involved in establishing several joint scientific projects with Moroccan, Portuguese, German and Japanese scientists aiming at studying the quantification and risk assessment of emerging organic contaminants and heavy metals in soil and surface waters in Tunisia. Most recently, he has been participating at the NATO-SfP project ‘Remediation Processes in Uranium and other Mining Explorations’. Dr. Ksibi is currently the Managing Editor of the Euro-Mediterranean Journal for Environmental Integration (Springer).

Dr. Ben Dhia is currently a Professor Emeritus in the Sfax National School of Engineering (University of Sfax, Tunisia). He studied in Tunisia and then in France where he graduated and obtained his PhD in Geothermal Energy and Aquifers Modeling from the Faculty of Sciences, Bordeaux and the Mining School of Paris. His working career started from Libya in the sector of water research within the Saharan region (1973–74), continued in Morocco at the National Phosphate Company (1975–1978), and ended in Tunisia as a full Professor at the University of Sfax (1979–2012). He was active in several research projects focusing on Hydrogeology, Geothermal Energy, Environmental Sciences and Engineering Geology. He has co-published more than 180 papers at national and international journals. Furthermore, he supervised and successfully handled about 50 master and 30 doctoral theses. Dr. Ben Dhia was also appointed as Head of the Earth Science Department (1982–1986) and Director (1993–1997) of the National School of Engineers of Sfax. He was also the President (Rector) of the University of Sfax (1997–2011). This long career permitted him to acquire solid skills and expertise in several fields such as Natural Resources, Green Growth, University Management and Entrepreneurship Learning/Coaching. Dr. Ben Dhia is currently the Executive Editor-in-Chief of the Euro-Mediterranean Journal for Environmental Integration (Springer).

Dr. Khélifi holds a B.Sc. in Natural Sciences (2001) and a M.Sc. in Earth & Environmental Sciences (2004) from the University of Sfax (Tunisia). He received fellowships from the global change System for Analysis, Research and Training (START) in 2005 and the German Academic Exchange Service (DAAD) from 2006 to 2010 to continue with his Ph.D. studies in Marine Geosciences (Specialty: Paleoceanography and Paleoclimatology) at the University of Kiel in Germany. After his Ph.D. in 2010, Dr. Khélifi received a postdoctoral research grant from the German Science Foundation (DFG) to start his self-designed research projects at the GEOMAR Ocean Research Centre in Kiel, Germany on reconstructing past changes in oceanography and climate in the North Atlantic and the Mediterranean Sea using marine sediment samples retrieved by the International Ocean Drilling Program (IODP) and applying foraminiferal and geochemical proxy methods. He published afterwards his research findings in highly ranked scientific journals. Dr. Khélifi also received funding from the European Science Foundation (ESF) and some European universities to co-organize with some of his colleagues from Kiel, Bordeaux and Bristol two Workshops on Pliocene climate in Bordeaux, France (2009) and Bristol, UK (2013). In early 2014 he received the Swiss Government Excellence Scholarship (SGES) to continue with his research projects at ETH Zurich, Switzerland. Although his interest in scientific research was and remained strong, he decided in March 2014 to pursue his career as a Senior Publishing Editor with Springer (a part of Springer Nature) in Heidelberg, Germany. He is mainly responsible for developing the Springer’s publishing program in the Middle East & North Africa (MENA). The program currently consists of developing 15 academic journals from the Arab World and publishing tens of scientific books each year. Dr. Khélifi also helps researchers in MENA countries publish their work by delivering educational seminars for authors, reviewers, and journal editors to help improve publication output and quality. He is also a Visiting Lecturer at the University of Carthage, Tunisia and King Saud University, KSA giving M.Sc./Ph.D. courses in geo-communication/-presentations and techniques of paper publishing, and career professional development workshops. Most recently, Dr. Khélifi has been awarded the 2016 Africa Green Future Leadership Award in recognition of work contributing to sustainable development through advancing science and promoting publications in Africa and Middle East. In 2017 Dr. Khélifi launched, in close collaboration with the Editors of the Euro-Mediterranean Journal for Environmental Integration, the first Springer conference dedicated to promote the Euro-Mediterranean integration process that emphasizes the vulnerability and proactive remediation of the Euro-Mediterranean region from an environmental point of view.