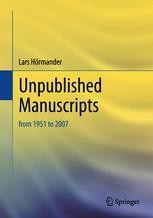 This book presents, for the first time, the unpublished manuscripts of Lars Hörmander, written between 1951 and 2007. Hörmander himself organised the manuscripts and also wrote the notes explaining their origins, presenting the material in the form he fully intended it to be published in. As his daughter, Sofia Broström, mentions in the Foreword, towards the end of his life, Hörmander "carefully went through his unpublished manuscripts, checking and revising each of them with his very critical eye, deciding what should be kept for posterity and what should be thrown out". He also compiled the complete bibliography of all his published mathematical works that is included at the end of the present book.

Of both historical and mathematical value, the contents of this book will undoubtedly inspire mathematicians of different horizons.

Lars Hörmander was born on January 24, 1931, on the southern coast of Sweden. His secondary schooling, as well as his undergraduate and doctoral studies, took place in Lund, Sweden. His principal teacher and adviser at the University of Lund was Marcel Riesz, until his retirement, and then Lars Gårding. In 1956 he worked in the USA, at the universities of Chicago, Kansas, Minnesota and New York, before returning to a chair at the University of Stockholm. He remained a frequent visitor to the US, particularly to Stanford, and was Professor at the IAS, Princeton from 1964 to 1968. In 1968 he accepted a chair at the University of Lund, and remained there until his retirement in 1996. He passed away on November 25, 2012, in Lund, at the age of 81.