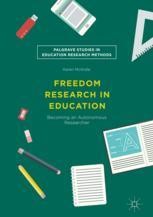 This book sets out a new and distinctive means of conceptualising research in the field of Education: ‘Freedom Research’. Freedom research is a conceptual understanding of research free from the strictures of orthodoxy; which adapts or knowingly critiques conventions about the ways in which research should be conducted. Underpinning this concept is the argument that the conventions of traditional approaches to research in education may be both confidence-sapping and constrictive to both the early career and mature educational researcher. By critiquing the boundaries of a socially constructed discipline, the researcher may then be liberated to research with freedom, creativity and innovation. This pioneering volume will assist the researcher to become more autonomous, and by extension more confident, in their own research practice. It will be of appeal to scholars, students and researchers in Education, of all stages of their career.

Karen McArdle is Professor Emerita at the University of Aberdeen, UK. She has been engaged in educational research for more than thirty years, primarily in the UK and Australia.

“This book challenges the reader to embrace the tensions and assumptions inherent, yet often invisible, in current orthodoxies in educational research.   It emphasises courage, confidence, creativity and a sense of moral purpose in making explicit and transparent the essence of researcher 'values' – i.e. morality, ethics, values and virtues – which lie at the core of research. Freedom Research in Education identifies the responsibilities of developing autonomous researchers and co-researchers who, through alternative approaches in research purpose and design, provide transparency, openness and robustness. This book invites the reader to think deeply about self and personal beliefs and about how they influence and are influenced by research communities… It is a thought-provoking read which will not only trigger debate, critique and discussion but contributes to reshaping the educational research trajectory.” (Professor Do Coyle, Director of Research and Knowledge Exchange, Moray House School of Education, University of Edinburgh, UK)

“There is a crisis of credibility in today’s world… the temptation to resort to orthodoxy and fundamentalism as a countermeasure is great.  The social sciences in the global North may have unwittingly been a driving force, through an unrelenting penchant for deconstruction on the one hand, and absolute claims of truth on the other.  Prof. McArdle skillfully exposes the cause of our current malaise as a lack of attention to values… our moral intention in fact determines the quality and worth of what we do.  Her antidote is a rigorous and vigilant reflexive stance which frees us to call into question all scientific norms, holding them to the standard of how they can help us in any given context promote social justice and equality in the lives of those we research.” (Professor Michael T. Wright, Catholic University of Applied Science Berlin, Germany and the International Collaboration for Participatory Health Research)