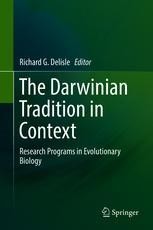 The Darwinian Tradition in Context

In the wake of the Synthetic Theory of Evolution, which was established throughout the 1930s, 1940s, and 1950s, historians and philosophers of biology devoted considerable attention to the Darwinian tradition, i.e., linking Charles Darwin to mid-Twentieth-Century developments in evolutionary biology. Since then, more recent developments in evolutionary biology have challenged, in part or entirely, the heritage of the Darwinian tradition. Not surprisingly, this has in turn been followed by a historiographical “recalibration” on the part of historians and philosophers regarding other research programs and traditions in evolutionary biology. In order to acknowledge this shift, the papers in this book have been arranged on the basis of two main threads:

Part I: A perspective that views Darwinism as either being originally pluralistic or having acquired such a pluralistic nature through modifications and borrowings over time.

Between a Darwinism reaching out to other research programs and non-Darwinian programs reaching out to Darwinism, the least that can be said is that this interweaving of intellectual threads blurs the historiographical field. This volume aims to open vital new avenues for approaching and reflecting on the development of evolutionary biology.
Show all
About the authors

“Delisle (philosophy, Univ. of Lethbridge, UK) has edited an insightful new volume on the history and philosophy of science. … Contributors to this volume include historians and philosophers of evolutionary biology, and they provide insights on how the research and discoveries of the past are presented or represented in historiographical perspectives. This reference would be useful in libraries that support programs in the history and philosophy of evolutionary biology. Summing Up: Recommended.” (K. M. Foos, Choice, Vol. 56 (2), October, 2018)