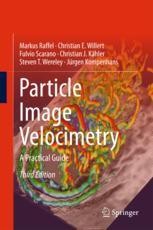 In this book, relevant theoretical background information directly support the practical aspects associated with the planning, performance and understanding of experiments employing the PIV technique. It is primarily intended for engineers, scientists and students, who already have some basic knowledge of fluid mechanics and non-intrusive optical measurement techniques. It shall guide researchers and engineers to design and perform their experiment successfully without requiring them to first become specialists in the field. Nonetheless many of the basic properties of PIV are provided as they must be well understood before a correct interpretation of the results is possible.

Markus Raffel received his degree in Mechanical Engineering in 1990 from the Technical University of Karlsruhe, his doctorate in Engineering in 1993 from the University of Hannover and his lecturer qualification (Habilitation) from the Technical University Clausthal, in 2001. He started working on PIV at the German Aerospace Center (DLR) in 1991 with emphasis on the development of PIV recording techniques in high-speed ows. In this process he applied the method to a number of aerodynamic problems mainly in the context of rotorcraft investigations. Markus Raffel additionally works on the development of other ow metrology like the background-oriented schlieren technique and the differential infrared thermography. He is professor at the University of Hannover and head of the Department of Helicopters at DLR's Institute of Aerodynamics and Flow Technology in Goettingen.
Christian Willert received his Bachelor of Science in Applied Science from the University of California at San Diego (UCSD) in 1987. Subsequent graduate work in experimental fluid mechanics at UCSD lead to the development of several non-intrusive measurement techniques for application in water (particle tracing, 3-D particle tracking, digital PIV). After receiving his Ph.D. in Engineering Sciences in 1992, he assumed post-doctoral positions first at the Institute for Nonlinear Science (INLS) at UCSD, then at the Graduate Aeronautical Laboratories at the California Institute of Technology (Caltech). In 1994 he joined DLR Goettingen's measurement sciences group as part of an exchange program between Caltech and DLR. Since 1997 he has been working in the development and application of planar velocimetry techniques (PIV and Doppler Global Velocimetry (DGV)) at the Institute of Propulsion Technology of DLR and now is heading the Department of Engine Measurement Techniques there.

Fulvio Scarano graduated in Aerospace Engineering at University of Naples (1996). Obtained the Ph.D. in 2000 (von Karman Institute, Theodor von Karman prize) and joined TU Delft at the faculty of Aerospace Engineering in the Aerodynamics Section in the same year. Since 2008 he is full professor of Aerodynamics and acts as head of section since 2010. Starting director of Aerospace Engineering Graduate School (2012). Currently director of the AWEP department (Aerodynamics, Wind Energy, Flight Performance and propulsion). Recipient of Marie-Curie grant (1999), Dutch Science Foundation VIDI grant (2005) and of the European Research Council grant (ERC, 2009). European project coordinator (AFDAR, Advanced Flow Diagnostics for Aeronautical Research, 2010-2013). Promoted and supervised more than 20 PhDs. The research interests cover the development of particle image velocimetry (PIV) and its applications to high-speed aerodynamics in the supersonic and hypersonic regime. Notable developments are the image deformation technique, Tomographic PIV for 3D ow velocity measurements and its use to Preface XI quantitatively determine pressure uctuations and acoustic emissions in wind tunnel experiments. Recent works deal with the combination of PIV data with CFD techniques, extension of PIV to large-scale wind tunnel experiments and applications ranging from sport aerodynamics to ground vehicles, from aircraft to rocket aerodynamics. Author of more than 200 publications, delivered more than 20 keynote lectures worldwide. He acts as editorial board member of many international conferences and journals, Measurement Science and Technology and Experiments in Fluids, among others.

Christian J. Kaehler received his Physics Diplom Degree from the Technical University Clausthal in 1997, his PhD in Physics from the Georg August University of Goettingen in 2004 and his Habilitation from the Technical University in Brunswick in 2008. From 1996 to 2001 Dr. Kaehler worked at the German Aerospace Center (DLR) in Goettingen (Dr. Kompenhans), during which he had research stays at the University of Illinois at Urbana Champaign in 1996 (Prof. Adrian) and at Caltech in 1998 (Prof. Gharib). From 2001 to 2008 he was the head of the research group on Flow Control and Measuring Techniques at the Technical University Brunswick (Prof. Radespiel). He then became Professor for Fluid Dynamics and was appointed director of the Institute of Fluid Mechanics and Aerodynamics of the University at der Bundeswehr Muenchen in 2008. In 2012, he was offered an Einstein professorship for Aerodynamics at the Technical University Berlin (declined) and in 2017 the Technical University Darmstadt offered him to become head of the chair of Fluid Mechanics (declined). His research covers a broad range of topics involving the development of optical measurement techniques on the micro and macro scale in order to further investigate complex phenomenon in microfluidics and turbulent flows at subsonic, transonic, and supersonic conditions. He is an associate editor of Experiments in Fluids (Springer Nature), an editorial advisory board member of Flow, Turbulence and Combustion (Springer Nature) and editorial board member of Theoretical & Applied Mechanics Letters (Elsevier) and a Steering committee member and organizer of the International PIV Challenge (2001 Goettingen, 2003 Busan, 2005 Pasadena, 2014 Lisbon).

Steven T. Wereley received both his Bachelor of Arts in Physics from Lawrence University at Appleton, Wisconsin, and his Bachelor of Science in Mechanical Engineering from Washington University at St. Louis in 1990. He received his Master of Science and Ph.D. degrees from Northwestern University in Evanston, Illinois, in 1992 and 1997, respectively. Subsequently, he spent two years at the Mechanical and Environmental Engineering Department at the University of California in Santa Barbara developing particle image velocimetry algorithms for micro-domain investigations. Since 1999 he has been a professor at Purdue University in the School of Mechanical Engineering - as an Assistant Professor from 1999 to 2005 and an Associate Professor since then. Professor Wereley's research is largely concerned with microparticle image velocimetry techniques and micro-electromechanical systems with applications in bio-physics and bio-engineering.

Juergen Kompenhans received his doctoral degree in physics in 1976 from the Georg-August University of Goettingen. From 1977 until 2011 he worked for the German Aerospace Center (DLR) in Goettingen, Germany, mainly developing and applying non-intrusive measurement techniques for aerodynamic research, starting with the PIV technique back in 1985. Since 2001 he has been head of the Department of Experimental Methods of DLR's Institute of Aerodynamics and Flow Technology in Goettingen. Within this department, image based methods such as Pressure Sensitive Paint, Temperature Sensitive Paint, Particle Image Velocimetry, model deformation measurement techniques, density measurement techniques, acoustic field measurement techniques etc. are developed for application as mobile systems in large industrial wind tunnels. As coordinator of several European networks he has contributed to promote and to disseminate the use of image based measurement techniques for industrial research. At present his interest is focused on contributing to the development of ow meters as well as of components required for the use of the PIV technique.