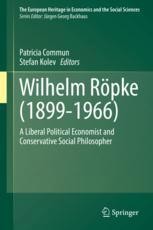 This volume provides a comprehensive account of Wilhelm Röpke as a liberal political economist and social philosopher. Wilhelm Röpke (1899-1966) was a key protagonist of transatlantic neoliberalism, a prominent public intellectual and a gifted international networker. As an original thinker, he always positioned himself at the interface between political economy and social philosophy, as well as between liberalism and conservatism. Röpke’s endeavors to combine these elements into a coherent whole, as well as his embeddedness in European and American intellectual networks of liberal and conservative thinkers, are a central theme throughout the book.

The volume includes papers by international experts from a conference in Geneva on the occasion of the 50th anniversary of Röpke’s passing. The first part focuses on new biographical insights into his exile years in Istanbul and Geneva, while the second part discusses his business cycle theory in the context of the Great Depression, and the third part elaborates on his multifaceted social philosophy.

Wilhelm Röpke was among the most important thinkers within the classical liberal revival post-WWII, with intriguing tensions between liberalism and conservatism. A highly recommended volume.

This important collection of papers provides an in-depth assessment of Wilhelm Röpke’s contributions, placing him in the context of his time. A fine contribution.

–– Bruce J. Caldwell, Director of the Center for the History of Political Economy and Research Professor of Economics, Duke University

Patricia Commun is a professor of German studies at the University of Cergy-Pontoise, France. Her fields of research are history of German economic thought, history of German liberalism and especially ordoliberalism. Patricia Commun’s last book (“Les Ordolibéraux. Histoire d'un libéralisme à l'allemande”, Les Belles Lettres, Paris 2016) covers the historical, political, and intellectual context of the refounding of German liberalism in the 1920s-1950s. Together with Stefan Kolev, she co-organized in April 2016 the International Wilhelm Röpke Conference in Geneva.

Stefan Kolev is a professor of political economy at the University of Applied Sciences Zwickau, Germany, and the deputy director of the Wilhelm Röpke Institute in Erfurt, Germany. His fields of research are history of economic thought, Austrian economics, and constitutional political economy. Stefan Kolev’s last book (“Neoliberale Staatsverständnisse im Vergleich”, 2nd edition, De Gruyter Oldenbourg, Berlin/Boston 2017) analyzes comparatively the political economies of ordoliberals and Austrian economists of the 20th century, whereas his current projects address the 19th century origins of these ideas and their revitalization for the 21st century.

“It is to the credit of the editors and contributors to this collection of essays that they have produced a book that will surely spur further discussion of the thought and ongoing relevance of a sophisticated and synthetic twentieth-century public economist and social philosopher.” (Samuel Gregg, Journal of Markets & Morality, Vol. 22 (1), 2019)
“The … book brings a welcome and timely contribution to a better understanding of such a complex concept as (neo)liberalism … Röpke’s books remain a source of inspiration for us today, in our age of sophists, bankers, and calculators.” (Aurelian Craiutu, Society, Vol. 56, 2019)