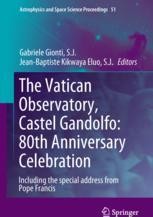 This book presents contributions from an internal symposium organized to celebrate the 80th anniversary of the Specola Vaticana, or Vatican Observatory, in the Papal Palace of Castel Gandolfo. The aim is to provide an overview of the scientific and cultural work being undertaken at the Observatory today and to describe the outcomes of important recent investigations. The contents cover interesting topics in a variety of areas, including planetary science and instrumentation, stellar evolution and stars, galaxies, cosmology, quantum gravity, the history of astronomy, and interactions between science, philosophy, and theology.

On September 29, 1935, Pope Pius XI officially inaugurated the new headquarters of the Specola Vaticana at Castel Gandolfo. With new telescopes, a new astrophysical laboratory for spectrochemical analysis, and a young staff comprising Jesuit scientists, this inauguration marked the beginning of an intense period of scientific achievements at the Observatory. This anniversary book, featuring contributions from members of the current Observatory staff and adjunct scholars, will appeal to all with an interest in the history of the Specola Vaticana and its significance for astronomy.

Gabriele Gionti, SJ, has been a member of the staff of the Vatican Observatory since 2010, where he studies quantum gravity and string theory and is in charge of a scientific collaboration with the theoretical division of CERN. Dr. Gionti was awarded a PhD in Mathematical Physics from the International School of Advanced Studies, Trieste, Italy in 1998. He joined the Jesuits in 2000 and in 2004 obtained a BA in Philosophy from the Gregorian University following study at the Aloisianum Philosophical Institute of the Society of Jesus in Padua, Italy. He was subsequently assigned to the Vatican Observatory in Tucson, Arizona and in 2006 moved to Berkeley, California, where he earned an MDiv/STB and an STL from the Jesuit School of Theology at Santa Clara University. He was ordained a Roman Catholic Priest in 2010. Dr. Gionti represents the Vatican Observatory on the Scientific Committee of the International Center for Relativistic Astrophysics (ICRA).

o, SJ, is Director of the Vatican Observatory and President of the Vatican Observatory Foundation. His particular area of research is asteroids and meteorites. Br. Consolmagno completed an MS in Planetary Science from MIT in 1975 and a PhD in Planetary Science from the University of Arizona in 1978. He took vows as a Jesuit brother in 1991 and was assigned to the Vatican Observatory in 1993. He subsequently held the MacLean Chair for Visiting Jesuit Scholars at St. Joseph's University, Philadelphia; the Loyola Chair at Fordham University, New York; and the Lanigan Chair in Science, Medicine, and Ethics at LeMoyne College, Syracuse. Br. Consolmagno has been a member of the IAU Working Group on Planetary System Nomenclature and the Mars Nomenclature Task Group, and in 2015 became chair of the Mars TG. He is also a past chair of the American Astronomical Society Division for Planetary Sciences. He became a Fellow of the Meteoritical Society in 2008 and in 2014 was awarded the Carl Sagan Medal for outstanding communication by an active planetary scientist to the general public.

Jean-Baptiste Kikwaya Eluo, SJ, is an astronomer at the Vatican Observatory whose fields of research include meteors, fireballs, asteroids, comets, and near-earth objects. He was born in the Democratic Republic of Congo in 1965 and studied at Institut Saint Pierre Canisius in Kimwenza, Democratic Republic of Congo from 1986 to 1989, gaining a BA in Philosophy. He obtained a Master’s degree in Celestial Mechanics from the University of Namur, Belgium, in 1994 and a BA in Theology at the Sevres Centre in Paris, France, in 1997. He was ordained to the priesthood in 1998. After ordination, he earned a diploma (DEA – Diplome d’Etudes Approfondies) in Astronomy and Celestial Mechanics at the Institute of Celestial Mechanics (IMCEE) – Observatory of Paris in 2001 (specializing in binary systems and asteroids) and an MA in Theology from the Centre Sevres in Paris in 2003. He

completed his PhD in Astronomy in 2010 at the University of Western Ontario, Canada.
Show all