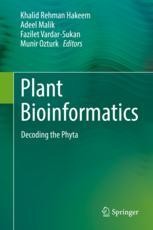 This book: (i) introduces fundamental and applied bioinformatics research in the field of plant life sciences; (ii) enlightens the potential users towards the recent advances in the development and application of novel computational methods available for the analysis and integration of plant -omics data; (iii) highlights relevant databases, softwares, tools and web resources developed till date to make ease of access for researchers working to decipher plant responses towards stresses; and (iv) presents a critical cross-talks on the available high-throughput data in plant research. Therefore, in addition to being a reference for the professional researchers, it is also of great interest to students and their professors.

Considering immense significance of plants for all lives on Earth, the major focus of research in plant biology has been to: (a) select plants that best fit the purposes of human, (b) develop crop plants superior in quality, quantity and farming practices when compared to natural (wild) plants, and (c) explore strategies to help plants to adapt biotic and abiotic/environmental stress factors. Accordingly the development of novel techniques and their applications have increased significantly in recent years. In particular, large amount of biological data have emerged from multi-omics approaches aimed at addressing numerous aspects of the plant systems under biotic or abiotic stresses. However, even though the field is evolving at a rapid pace, information on the cross-talks and/or critical digestion of research outcomes in the context of plant bioinformatics is scarce. “Plant Bioinformatics: Decoding the Phyta” is aimed to bridge this gap.
Show all
About the authors

Dr. Khalid Rehman Hakeem (PhD) is working as Associate Professor at Department of Biological Sciences, Faculty of Science, King Abdulaziz University, Jeddah, Saudi Arabia, He has obtained his MSc. (Environmental Botany) as well as PhD (Botany) from Jamia Hamdard, New Delhi, India in 2006 and 2011 respectively. He has conducted his Post Doctorate research in the fields of plant ecology and plant biotechnological studies from Universiti Putra Malaysia from 2012-2013. Dr. Hakeem has more than Nine years of teaching and research experience in Plant Eco-Physiology, Biotechnology & Molecular biology, Plant Bioinformatics, Plant-Microbe-soil interactions as well as in Environmental sciences. Recipient of several fellowships at both national and international levels, Dr. Hakeem has so far edited and authored more than Twenty books with International publishers. He has also to his credit more than 100 research publications in peer reviewed international journals, including 35 book chapters with international publishers. He is also the Editorial board member and reviewer of several high impact international Journals. Dr. Hakeem is currently engaged in studying the plant processes at ecophysiological as well as proteomic levels.
Adeel Malik (PhD) is currently working as a Research Professor at Chungnam National University, Daejeon, South Korea. He obtained his PhD (2009) from the Dept. of Biosciences, Jamia Millia Islamia (JMI), New Delhi, India. During his PhD, he developed computational methods for the prediction of carbohydrate binding sites in proteins using sequence and evolutionary information. He obtained his postdoctoral fellowship from School of Computational Sciences, Korea Institute for Advanced Study (KIAS), Seoul, South Korea (2011-2012). As a part of his research, he investigated plant lectin-carbohydrate interactions via community-based network analysis by using glycan array data. He worked as an Assistant Professor at School of Biotechnology, Yeungnam University, South Korea and later at Perdana University Center for Bioinformatics (PU-CBi), Malaysia. His research interests include developing computational methods for studying protein-carbohydrate interactions and applyinging bioinformatics approaches to explore the role of glycogenes in various biological processes. He has published about 19 research articles in high impact journals including 3 book chapters.
Prof. Munir Ozturk (PhD, DSc.) was born in Kashmir (1943) and holds PhD+DSc degrees in Ecology & Environmental Sciences from Ege University, Turkey. He is author of over 450 papers on ecological studies as well as biomonitoring in different habitats and is member in the editorial board of as well as reviewer in several journals. Dr. Öztürk has received fellowships from Alexander von Humboldt and Japanese Society for Promotion of Science. He has worked at the University of Chapel Hill, North Carolina using the grant from National Science Foundation, USA; as well as a Consultant Fellow at the Faculty of Forestry, University Putra Malaysia and as “Distinguished Visiting Scientist” at the ICCBS, Karachi University, Pakistan. His fields of scientific interest are; Plant Eco-Physiology; Conservation of Plant Diversity; Biosaline Agriculture and Crops; Pollution, Biomonitoring, Medicinal/Aromatic Plants. The current number of his publications lies around 450. These include over 40 books, nearly 55 book chapters, more than 170 papers in impact factor journals and more than 150 presentations in “National and International Conferences, Workshops, Symposia” and has acted as guest editor for several international journals.

Prof. Vardar-Sukan (PhD) is a chemical engineer graduated from Ege University, Izmir, Turkey with aPh.D.in biochemical engineering from University College London, UK. She has 35 years of teaching and research experience and has over150 publications in the fields of scale-up, mass and momentum transfer in bioreactors, re-utilization of agro-industrial waste through bio-industries and R&D & I management and support and nearly 1500 citations. She is the founding head of the Bioengineering Department at Ege University since 2000 and is a pioneer in the field in Turkey. She has been involved in 21 EU supported projects and 27 national and international projects supported by different national, international funds or industry on biotechnology, R&D and innovation support, science and society, either as a coordinator, partner or researcher. She is a refree in numerous scientific journals. She is the holder of Turkish Scientific and Technological Council Incentive award in Bioegineering in 1989 and has three patent applications one of them being a PCT. She is currently the Chair-person of the national Biotechnology Strategy Committee of the Ministry of Science, Industry and Technology of TurkeyIndustry and Technology of Turkey.
Show all