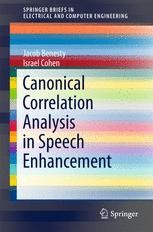 This book focuses on the application of canonical correlation analysis (CCA) to speech enhancement using the filtering approach. The authors explain how to derive different classes of time-domain and time-frequency-domain noise reduction filters, which are optimal from the CCA perspective for both single-channel and multichannel speech enhancement. Enhancement of noisy speech has been a challenging problem for many researchers over the past few decades and remains an active research area. Typically, speech enhancement algorithms operate in the short-time Fourier transform (STFT) domain, where the clean speech spectral coefficients are estimated using a multiplicative gain function. A filtering approach, which can be performed in the time domain or in the subband domain, obtains an estimate of the clean speech sample at every time instant or time-frequency bin by applying a filtering vector to the noisy speech vector.

Compared to the multiplicative gain approach, the filtering approach more naturally takes into account the correlation of the speech signal in adjacent time frames. In this study, the authors pursue the filtering approach and show how to apply CCA to the speech enhancement problem. They also address the problem of adaptive beamforming from the CCA perspective, and show that the well-known Wiener and minimum variance distortionless response (MVDR) beamformers are particular cases of a general class of CCA-based adaptive beamformers.

Jacob Benesty received his Master’s degree in Microwaves from Pierre & Marie Curie University, France, in 1987, and his Ph.D. in Control and Signal Processing from Orsay University, France, in 1991. From January 1994 to July 1995, he worked at Telecom Paris University on multichannel adaptive filters and acoustic echo cancellation. From October 1995 to May 2003, he was first a Consultant and then a Member of the Technical Staff at Bell Laboratories, Murray Hill, New Jersey (NJ), USA. In May 2003, he joined the University of Quebec, INRS-EMT, in Montreal, Quebec, Canada, as a Professor. His research interests include signal processing, acoustic signal processing, and mult

imedia communications. Dr. Benesty received the 2001 Best Paper Award from the IEEE Signal Processing Society. He has co-authored multiple books with Springer Verlag and is the series editor for the “Springer Topics in Signal Processing”.

From 1990 to 1998, he was a Research Scientist with RAFAEL Research Laboratories, Haifa, Israel Ministry of Defense. From 1998 to 2001, he was a Postdoctoral Research Associate with the Department of Computer Science, Yale University, New Haven, Connecticut (CT), USA. In 2001, he joined the Technion’s Department of Electrical Engineering.

He is a coeditor of the multichannel speech processing section of the Springer Handbook of Speech Processing (Springer, 2008), a co-author of Noise Reduction in