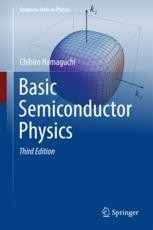 The new edition of this textbook presents a detailed description of basic semiconductor physics. The text covers a wide range of important phenomena in semiconductors, from the simple to the advanced. Four different methods of energy band calculations in the full band region are explained: local empirical pseudopotential, non-local pseudopotential, KP perturbation and tight-binding methods. The effective mass approximation and electron motion in a periodic potential, Boltzmann transport equation and deformation potentials used for analysis of transport properties are discussed.
Further, the book examines experiments and theoretical analyses of cyclotron resonance in detail. Optical and transport properties, magneto-transport, two-dimensional electron gas transport (HEMT and MOSFET) and quantum transport are reviewed, while optical transition, electron-phonon interaction and electron mobility are also addressed.
Energy and electronic structure of a quantum dot (artificial atom) are explained with the help of Slater determinants. The physics of semiconductor lasers is also described, including Einstein coefficients, stimulated emission, spontaneous emission, laser gain, double heterostructures, blue lasers, optical confinement, laser modes, and strained quantum well lasers, offering insights into the physics of various kinds of semiconductor lasers.
In this third edition, energy band calculations in full band zone with spin-orbit interaction are presented, showing all the matrix elements and equipping the reader to prepare computer programs of energy band calculations. The Luttinger Hamiltonian is discussed and used to analyze the valence band structure. Numerical calculations of scattering rate, relaxation time, and mobility are presented for typical semiconductors, which are very helpful for understanding of transport. Energy band structures and effective masses of nitrides such as GaN, InN, AlN and their ternary alloys are discussed because they are very important materials for the blue light emission, and high power devices with and high frequency.
Learning and teaching with this textbook is supported by problems and solutions in the end of the chapters.
The book is written for bachelor and upper undergraduate students of physics and engineering.

Chihiro Hamaguchi graduated from Electrical Engineering (BS) in 1961, and MS Degree in 1963, and Graduate School of Engineering with Ph.D. Degree 1n 1966, all from Osaka University. He served as a research associate of Engineering Science in 1966, and an associate professor of Electronic Engineering in 1967, of Osaka University. He was a visiting research associate of Physics Department of Purdue University (USA), from 1967 to 1969. He was appointed full professor of Electronic Engineering Department of Osaka University in 1985 and retired in 2001, awarded Professor Emeritus. He was employed as an advisory board member of Sharp Corporation form 2001 till 2014, and also a visiting professor of Kochi University of Technology from 2001 till now. His major field of research is hot carrier transport, magnetotransport, modulation spectroscopy of quantum structures, and quantum transport in heterostructures, energy band calculations of superlattices and nitrides, publishing more than 350 papers. He was elected as 1990: Fellow of the American Physical Society (1990), Fellow of the Institute of  Electrical and Electronics Engineers (IEEE) (1992), Fellow of the Institute of Physics, U.K .(1999), and Fellow of the Japan Society of Applied Physics (2008). He received the Award of Gold Rays with Neck Ribbon” (Zuiho-Chuju Shou in Japanese) from Japanese Government and the Emeror in 2016. He published several text books in Japanese, such as Introduction to Electronics and Physics of Materials, Semiconductor Devisce Physics, and Electromagnetic Theory (to be published).

He is a Fellow of American Physical Soviety, Instutute of Physics (U.K.), Institute of Electrical and Electronics Engineers (IEEE, U.S.A), and Japan Society of Applied Physics. He received the Award of Gold Rays with Neck Ribbon” (Zuiho-Chuju Shou in Japanese) in 2016.