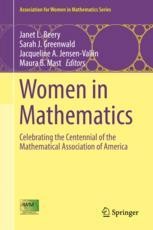 Celebrating the Centennial of the Mathematical Association of America

This collection of refereed papers celebrates the contributions, achievements, and progress of female mathematicians, mostly in the 20th and 21st centuries. Emerging from the themed paper session “The Contributions of Women to Mathematics: 100 Years and Counting” at MAA's 2015 MathFest, this volume contains a diverse mix of current scholarship and exposition on women and mathematics, including biographies, histories, and cultural discussions. The multiplicity of authors also ensures a wide variety of perspectives.

In inspiring and informative chapters, the authors featured in this volume reflect on the accomplishments of women in mathematics, showcasing the changes in mathematical culture that resulted as more women obtained tenure-track and tenured academic positions, received prestigious awards and honors, served in leadership roles in professional societies, and became more visibly active in the mathematical community. Readers will find discussions of mathematical excellence at Girton College, Cambridge, in the late 19th and early 20th centuries; of perseverance by Polish women in mathematics during and after World War II and by Black women in mathematics in the United States from the 1880s onward; and of the impact of outreach programs ranging from EDGE's promotion of graduate education to the Daughters of Hypatia dance performances. The volume also provides informative biographies of a variety of women from mathematics and statistics, many of them well-known and others less well-known, including Charlotte Angas Scott, Emmy Noether, Mina Rees, Gertrude Cox, Euphemia Lofton Haynes, Norma Hernandez, Deborah Tepper Haimo, and Teri Perl.These essays provide compelling reading for a wide audience, including mathematicians, historians of science, teachers of mathematics, and students at the high school, college, and graduate levels. Anyone interested in attracting more girls and women as students, faculty, and/or employees will also find this volume engaging and enlightening.
Show all
Reviews

“This volume will provide inspiration to its readers, showing them how women have made substantial contributions, as individuals and as groups, to mathematics research, mathematics education, mathematical culture, and outreach, and inspiring them, in turn, to encourage women and girls to pursue mathematical careers. … The book under review will serve as a welcome and useful sourcebook.” (Christopher Hollings, Mathematics Today, Vol. 55 (5), October, 2019)

“The editors have done a good job in selecting and grouping the papers into three strands — there are biographical papers, papers on mathematics education, and beginning the book, with the largest section, thematic papers, on women mathematicians in particular times or places. … I found this book to be inspirational and informative. I think it has a place in every university library.” (Sarah Hart, London Mathematical Society Newsletter, newsletter.lms.ac.uk, Issue 483, July, 2019)

“This book is a collection of papers on biographies, histories, studies, cultural discussions, etc. of women mathematicians in the last two centuries. … The book is very interesting and can serve for the promotion of more women in mathematics.” (Angela Slavova, zbMATH 1391.01006, 2018)