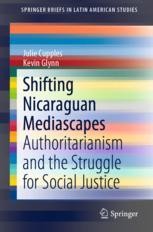 Authoritarianism and the Struggle for Social Justice

This book explores the mediated struggles for autonomy, land rights and social justice in a context of growing authoritarianism and persistent coloniality in Nicaragua. To do so, it draws on in-depth fieldwork, analysis of media texts, and decolonial and other cultural theories. There are two main threats to the authoritarian rule of the Nicaraguan government led by Daniel Ortega: the first is the Managua-based NGO and civil society sector led largely by educated dissident Sandinistas, and the second is the escalating struggle for autonomy and land rights being fought by Nicaragua’s indigenous and Afro-descended inhabitants on the country’s Caribbean coast. In order to confront these threats and, it seems, secure indefinite political tenure, the government engages in a set of centralizing and anti-democratic political strategies characterized by secrecy, institutional power grabs, highly suspect electoral practices, clientelistic anti-poverty programmes, and the control through purchase or co-optation of much of the nation's media. The social movements that threaten Ortega’s rule are however operating through dispersed and topological modalities of power and the creative use of emergent spaces for the circulation of counter-discourses and counter-narratives within a rapidly transforming media environment. The primary response to these mediated tactics is a politics of silence and a refusal to acknowledge or respond to the political claims made by social movements. In the current conjuncture, the authors identify a struggle for hegemony whose strategies and tactics include the citizenship-stripping activities of the state and the citizenship-claiming activities of black, indigenous and dissident actors and activists. This struggle plays out in part through the mediated circulation and counter-circulation of discourses and the infrastructural dynamics of media convergence.

Dr. Julie Cupples is Reader is Human Geography and Co-Director of the Global Development Academy at the University of Edinburgh. Her work spans cultural geography, development studies and media studies. She has been working in Nicaragua since 1990 and has published on questions of development/postdevelopment, gender and sexuality, disasters and environmental risk, elections, municipal governance, neoliberalism and indigenous media. She is the author of Latin American Development (Routledge 2013), the co-editor of Mediated Geographies and Geographies of Media (Springer 2015) and the co-author of Communications/Media/Geographies (Routledge 2017).

Dr. Kevin Glynn is Associate Professor at Northumbria University in Newcastle, UK.  He is author of Tabloid Culture: Trash Taste, Popular Power, and the Transformation of American Television (Duke University Press) and coauthor of Communications/Media/Geographies (Routledge).  His research is situated at the intersection of media and cultural studies.  His recent publications have examined Indigenous peoples’ media and globalization, digital media and convergence culture, popular and political cultures of the Americas, decolonial struggles in the new media environment, and intersections between media studies, cultural studies and cultural geography.

This research was conducted as part of the project, “Geographies of Media Convergence: Spaces of Democracy, Connectivity and the Reconfiguration of Cultural Citizenship,” which was funded by the Marsden Fund of the Royal Society of New Zealand and explores indigenous and Afro-descendant media practices; the dynamics of media convergence; and intersections between popular culture, politics, cultural citizenship and the media.