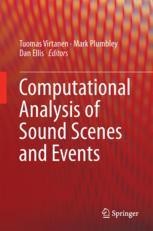 This book presents computational methods for extracting the useful information from audio signals, collecting the state of the art in the field of sound event and scene analysis. The authors cover the entire procedure for developing such methods, ranging from data acquisition and labeling, through the design of taxonomies used in the systems, to signal processing methods for feature extraction and machine learning methods for sound recognition. The book also covers advanced techniques for dealing with environmental variation and multiple overlapping sound sources, and taking advantage of multiple microphones or other modalities. The book gives examples of usage scenarios in large media databases, acoustic monitoring, bioacoustics, and context-aware devices. Graphical illustrations of sound signals and their spectrographic representations are presented, as well as block diagrams and pseudocode of algorithms.

Tuomas Virtanen is Professor at Laboratory of Signal Processing, Tampere University of Technology (TUT), Finland, where he is leading the Audio Research Group. He received the M.Sc. and Doctor of Science degrees in information technology from TUT in 2001 and 2006, respectively. He has also been working as a research associate at Cambridge University Engineering Department, UK. He is known for his pioneering work on single-channel sound source separation using non-negative matrix factorization based techniques, and their application to noise-robust speech recognition, music content analysis and audio event detection. In addition to the above topics, his research interests include content analysis of audio signals in general and machine learning. He has authored more than 100 scientific publications on the above topics, which have been cited more than 5000 times. He has received the IEEE Signal Processing Society 2012 best paper award for his article "Monaural Sound Source Separation by Nonnegative Matrix Factorization with Temporal Continuity and Sparseness Criteria" as well as three other best paper awards. He is an IEEE Senior Member, a member of the Audio and Acoustic Signal Processing Technical Committee of IEEE Signal Processing Society, Associate Editor of IEEE/ACM Transaction on Audio, Speech, and Language Processing and recipient of the ERC 2014 Starting Grant.

Mark Plumbley is Professor of Signal Processing at the Centre for Vision, Speech and Signal Processing (CVSSP) at the University of Surrey, in Guildford, UK. After receiving his Ph.D. degree in neural networks in 1991, he became a Lecturer at King's College London, before moving to Queen Mary University of London in 2002. He subsequently became Professor and Director of the Centre for Digital Music, before joining the University of Surrey in 2015. He is known for his work on analysis and processing of audio and music, using a wide range of signal processing techniques, including independent component analysis, sparse representations, and deep learning. He has also a keen to promote the importance of research software and data in audio and music research, including training researchers to follow the principles of reproducible research, and he led the 2013 D-CASE data challenge on Detection and Classification of Acoustic Scenes and Events. He currently leads two EU-funded research training networks in sparse representations, compressed sensing and machine sensing, and leads two major UK-funded projects on audio source separation and making sense of everyday sounds. He is a Fellow of the IET and IEEE.

Dan Ellis joined Google Inc., in 2015 as a Research Scientist after spending 15 years as a tenured professor in the Electrical Engineering department of Columbia University, where he founded and led the Laboratory for Recognition and Organization of Speech and Audio (LabROSA) which conducted research into all aspects of extracting information from sound. He is also an External Fellow of the International Computer Science Institute in Berkeley, CA, where he researched approaches to robust speech recognition. He is known for his contributions to Computational Auditory Scene Analysis, and for developing and transferring techniques between all different kinds of audio processing including speech, music, and environmental sounds. He has a long track record of supporting the community through public releases of code and data, including the Million Song Dataset of features and metadata for one million pop music tracks, which has become the standard large-scale research set in the Music Information Retrieval field.