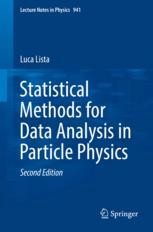 This concise set of course-based notes provides the reader with the main concepts and tools needed to perform statistical analyses of experimental data, in particular in the field of high-energy physics (HEP).

First, the book provides an introduction to probability theory and basic statistics, mainly intended as a refresher from readers’ advanced undergraduate studies, but also to help them clearly distinguish between the Frequentist and Bayesian approaches and interpretations in subsequent applications. More advanced concepts and applications are gradually introduced, culminating in the chapter on both discoveries and upper limits, as many applications in HEP concern hypothesis testing, where the main goal is often to provide better and better limits so as to eventually be able to distinguish between competing hypotheses, or to rule out some of them altogether.

Many worked-out examples will help newcomers to the field and graduate students alike understand the pitfalls involved in applying theoretical concepts to actual data.

Luca Lista works on the CMS experiment at CERN's Large Hadron Collider, specifically on the search for dark matter and on top-quark physics. He has been involved in testing the Standard Model of particle physics and in the search for the Higgs boson.