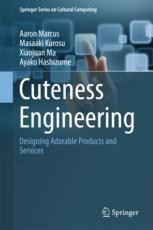 This state of the art monograph presents a unique introduction to thinking about cuteness and its incorporation into modern, especially computer-based, products and services. Cuteness is defined and explored in relation to user-centered design concepts and methods, in addition to considering the history of cuteness and cuteness in other cultures, especially in relation to eastern Asia.

The authors provide detailed analyses and histories of cuteness in Japan and in China, the rise of Kawaii and Moe cultural artifacts, and their relation to social, psychological, and design issues. They also attempt an initial taxonomy of cuteness. Finally, detailed interviews with leading designers of cute products and services, such as Hello Kitty, provide an understanding of the philosophy and decision-making process of designers of cuteness.

Cuteness Engineering: Designing Adorable Products and Services will be of interest and use to a wide range of professionals, researchers, academics, and students who are interested in exploring the world of cuteness in fresh new ways and gaining insights useful for their work and studies.

Aaron Marcus, Principal of Aaron Marcus and Associates (AM+A), and Editor-in-Chief Emeritus of User Experience Magazine, is a pioneer of user-experience design, publisher of 29 books and more than 300 articles, and the first graphic designer to be elected to both the CHI Academy and to the AIGA Fellows. AM+A has been in business for more than a 35 years, providing user-centered solutions on projects ranging from start-up ventures to business applications launched by some of the largest companies in the world. AM+A has served approximately 300 clients and completed approximately 500 projects.

Masaaki Kurosu is a Professor Emeritus at the Open University of Japan, since 2017 and is an Emeritus President of HCD-Net after working as a President for 10 years. He was a professor at the Open University of Japan for 2009-2017 and was a professor at NIME for 2001-2009, a professor at Shizuoka University for 1996-2001. He was formerly working for Hitachi Ltd. at the Design Center and the Central Research Laboratory for 1978-1996. He proposed the concept of User Engineering, AET (Artifact Evolution Theory), ERM (Experience Recollection Method) and other usability/UX-related methods and concepts.

Ayako Hashizume is an assistant professor at the Tokyo Metropolitan University since 2012. Her research interests include psychology of emotion and Kansei, engineering in relation to Human Centered Design and UX (user experience).  She was awarded the kids design prospective competition 2008 from the Japan Kids Design Association, the best design prize at the design marathon 2009 from the International Association for Universal Design and the research prize 2013 from the Funai Foundation for Information Technology.  She is a chief of the SIG-Kansei of HCD-Net. She received her Ph.D. in Kansei Science from Tsukuba University, Japan, in 2011.

“The book provides a new theoretical model to understand the cultural and contextual meanings of personality design, specifically cuteness. This model has the potential to lead user-experience professionals and software developers toward the future of personality design in artificial intelligence.” (Laura Rokey, IEEE Transactions on Professional Communication, Vol. 62 (1), March, 2019)