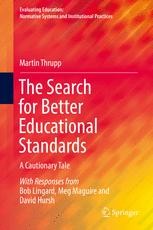 The Search for Better Educational Standards

​This book deals with the development of New Zealand’s standards system for primary school achievement, ‘Kiwi Standards’, which took effect from 2010 onwards and is becoming increasingly embedded over time. The approach, where teachers make ‘Overall Teacher Judgements’ based on a range of assessment tools and their own observations rather than using any particular national test, has created predictable problems with moderation within and across schools. It has been claimed that this ‘bold’ Kiwi Standards approach avoids the narrowed curriculum and mediocre outcomes of high-stakes assessment in other countries. Yet this book suggests it just produces another variant of the same problems and demonstrates that even a relatively weak high-stakes assessment approach still produces performative effects. The book provides a blow by blow account of the development of a policy including the continuous repositioning of New Zealand’s Government as it has sought to justify the policy in the face of opposition from educators. Indeed the Kiwi Standards tale provides a world-class example of teachers fighting back against policy, with the help of academics. There is an indigenous Māori aspect to the story as well. Finally, this book also provides comparative international perspectives including responses from well-known US, English and Australian academics.

“The Search for Better Educational Standards: A Cautionary Tale makes a considerable and considered contribution to policy sociology in education and should be read by all in this research field. In addition to providing an instructive policy analysis, A Cautionary Tale also offers thoughtful and informative suggestions for activist researchers in this policy domain and makes a powerful case for teacher unions using research as an important part of their political strategies. The analysis of Kiwi Standards also seems to demonstrate that instead of evidence-informed policy what we have here is more a case of policy-based evidence, with the political in the Kiwi Standards very much overriding research evidence and professional knowledges, to the detriment of the reform.” (Bob Lingard, Professorial Research Fellow, School of Education, The University of Queensland, Brisbane, Australia)


“It seems that New Zealand and the US are at crossroads in their education system. If some policymakers have their way, education will be reduced to statistics and algorithms. People will be marginalized as numbers take precedence over people. In the US, the Trump administration aims to replace the secular with the sacred, and the public with the private. However, both visions serve not as merely cautionary but alarming tales. They prompt, just as we have seen in hundreds of mass demonstrations across the US, a reassertion of the right to live in democratic, diverse and inclusive societies. In New Zealand, the push for standardized testing and reducing children to test scores is being resisted. New Zealand schools might still help to build a democratic society.” (David Hursh, Professor of Teaching and Curriculum, Warner Graduate School of Education and Human Development, University of Rochester, Rochester, New York, United States of America)

“One of the saddest thoughts that I had while reading this critical account of politics, policy and pedagogy was about the lack of recognition from politicians of the strengths and capabilities of the impressive primary school system that exists in New Zealand. Another thought that kept crossing my mind was the way in which similar reforms are having similar outcomes in primary schools in my own setting of England. But…New Zealand primary educationalists have a strong organisation with a very public and powerful commitment towards holding onto progressive classroom practices.” (Meg Maguire, Professor of Sociology of Education, School of Education, Communication & Society, King’s College London, England)