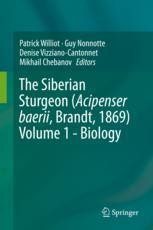 The biology of the Siberian sturgeon, Acipenser baerii Brandt 1869, has become a very attractive subject of investigation for biologists since the 1980s. This volume 1 is part of a two-volume set devoted to the species, the second of which focuses on farming. The present volume is divided into three parts: Biology and ecology, Biology and physiology of reproduction, and Ecophysiology, i.e. adaptation to the environment.

The first part addresses a broad range of topics, such as: the ecology, including a new approach to species-specificity, a new insight on the mineralization of vertebral elements, two approaches to sex determination, transposable elements in the gonads, early ontogeny, olfaction and gustation, nutrition and swimming. The second part includes neurochemical and anatomical descriptions of the central nervous system and an updated version of the oogenesis, the characteristics of both sperm and spermatozoa, and a synthesis on gonadal steroids (synthesis, plasmatic levels and biological activities). In turn, the third part reveals how the physiology of the species changes depending on environmental factors such as oxygen, ammonia, and nitrite. Some fundamental consequences of ammonia are developed (sublethal and lethal levels, effects on gill epithelium and haematology, acid-base balance, on AA and adenyl nucleotides levels in plasma, brain and muscle tissue). In addition, the book includes two methodological chapters dealing with fish dorsal aortic cannulation and respiration physiology.
Show all
About the authors

Patrick Williot
Patrick took on the challenge of preventing the disappearance of the critically endangered European sturgeon and developing sturgeon farming. To do so, he mobilized all the means of research, including the use of biological models of the Siberian sturgeon. He was the kingpin of the First International Symposium on Sturgeon held in Bordeaux in 1989. In 2007, he succeeded in achieving the controlled reproduction of farmed European sturgeon for the first time. He has strongly supported Siberian sturgeon farming in France. Patrick has edited several peer-reviewed books and proceedings on aquaculture and conservation biology, mainly on sturgeon, and published over 90 papers in peer-reviewed journals or books.

Guy Nonotte
Researcher at the CNRS, with a PhD from the University of Strasbourg, Guy NONNOTTE  has pursued research on fish physiology i.e.  ionic regulation,  respiration, extracellular acid-base balance and cell volume regulation in freshwater and sea-water  fishes  exposed to environmental changes and pollutants with a specific interest in the model « Siberian sturgeon ». He supervised a thesis on the toxicity of ammonia for the Siberian sturgeon in collaboration with Dr. Patrick Williot. In 1994, he was appointed Professor of Animal Physiology at the University of Brest (France) and Emeritus Professor of this University in 2007. He has published more than 100 articles in international reviews and supervised numerous theses on fish ecophysiology.

Mikhail Chebanov
Dr.Sc., Professor at the Aquatic Bioresources and Aquaculture Department of  Kuban State University  and  Director of State Centre for Sturgeon Gene Pool Conservation, Russia. He received an award from the Government of Russia in Science for developing technology for the year-round reproduction of sturgeon and for the global implementation of ultrasound for breeding stock management. He served as consultant FAO, convener of the Management of Sturgeons Working Party EIFAC - FAO, deputy chair and member of the IUCN Sturgeon Specialists Group. Chebanov is co-founder and member of the World Sturgeon Conservation Society board of directors. He has chaired numerous International workshops and symposia sessions.

Denise Vizziano Cantonnet
Denise Vizziano Cantonnet is a professor at the Universidad de la República Oriental del Uruguay and member of the National System of Researchers of Uruguay. She has a PhD from the Université de Rennes I (France) and worked as an invited professor at Rennes I and in several Universities in Latin America (Argentina, Brazil, Chile, Colombia, Peru). For more than 20 years she has been involved in the Latin- American postgraduate course on Reproductive Endocrinology of Fish to develop this area in the American continent. In the context of sturgeons, she is investigating the molecular basis of sex differentiation. Together with French colleagues, she created the first gonadal transcriptome for Siberian sturgeon and the first global tissue transcriptome.