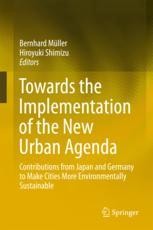 Towards the Implementation of the New Urban Agenda

This book looks at the New Urban Agenda and prospects of its implementation. In 2016, the New Urban Agenda was endorsed by the General Assembly of the United Nations after having been adopted by the United Nations Conference on Housing and Sustainable Urban Development (Habitat III) in Quito, Ecuador. Together with the Sustainable Development Goals, it provides a comprehensive and ambitious roadmap for global debate and action related to sustainable urbanisation during the coming decades. As mature economies and ageing societies, Japan and Germany can make considerable contributions to the implementation of the New Urban Agenda. Both countries share a number of similar challenges for environmentally sustainable and resilient urban development under conditions of social change. Furthermore, they have vast experience in actively promoting urban transformation towards a more sustainable urban future. At the same time the authors are making a contribution towards implementing the New Urban Agenda. Other countries may build up on the experience provided and the 20 examples described in this book. The work is based on a longstanding cooperation between the Graduate School of Environmental Studies of the Nagoya University (Japan), the Leibniz Institute of Ecological Urban and Regional Development (Germany) and the Technische Universität Dresden (Germany).

From January 1986 to August 1989, he taught architectural planning at the Faculty of Engineering of Chiba Institute of Technology as an instructor and associate professor. In September 1989, he moved to School of Engineering of Nagoya University as an associate professor, and became a professor in January 1996. In this period, he has developed his research fields not only in architectural planning but also in urban planning. In April 2001, he moved to the Graduate School of Environmental Studies due to university reorganization. This graduate school is a new integrated organization combining the inter-disciplinary academic fields of social sciences, engineering and natural sciences. Furthermore, it aims to solve both, global and local environmental issues from scratch. According to this academic policy, he expanded his new research field to landscape planning and management. The results of his studies are published internationally for instance in the following books:

Especially in the latter book, he proposed a new concept of “landscape management labor accounts”, which is useful calculate labor forces needed for the appropriate maintenance of an ecological landscape.

Bernhard Müller, a geographer and planner, is the Director of the Dresden-based Leibniz Institute of Ecological Urban and Regional Development (IOER) and Professor for Spatial Development at the Technische Universität Dresden. He is a member of the German Academy of Science and Engineering (acatech), the Saxonian Academy of Sciences, and the German Academy for Spatial Research and Planning (ARL). He was a policy unit member for the Habitat III conference in Quito 2016.

Bernhard Müller is the Director of the Dresden-based Leibniz Institute of Ecological Urban and Regional Development (IOER) and Professor for Spatial Development at the Technische Universität Dresden. He is also the initiator and head of the Managing Board of the internationally oriented Dresden Leibniz Graduate School (DLGS) which deals with issues of sustainable urban and regional development. Bernhard Müller has a doctoral degree in Geography from the University of Mainz, and completed his habilitation in urban

Bernhard Müller was a Vice President of the Leibniz Association, one of the major non-university research organisations in Germany. He is a member of the German Academy of Science and Engineering (acatech), the Saxonian Academy of Sciences, and the German Academy for Spatial Research and Planning (ARL). He is also an international member of the Serbian Academy of Engineering Sciences. He has been working as an evaluator for several European research programs. He was a member of the Advisory Council for Regional Policy and Planning of the Federal Republic of Germany, and of the Environmental Research Council of the State of Saxony. In 2015/16, he was a member of Policy Unit No. 6 on “Urban Spatial Strategies: Land Market and Segregation“ for Habitat III (Quito 2016).