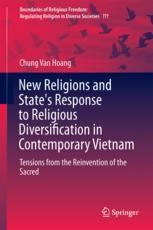 Tensions from the Reinvention of the Sacred

This book approaches newly emerging religious groups through the interplay between religious and non-religious spheres in the specific context of Vietnam. It considers the new religious groups as a part of religious reconfiguration in Vietnam caused by intensified interactions among these spheres. It explores changes of relationship between religions, and changes between the religious sphere and the political, economic and public spheres in contemporary Vietnam. Specifically, it traces trajectories of religious development in relation to politico-economic changes in this rapidly modernising nation. It tests a hypothesis that at least some new yet unrecognized new religious groups have a positive/ active role in modernisation rather than a negative/reactive role.

To this end, the book draws on a number of research approaches and methodologies in an effort to provide readers with a multi-faceted understanding of Vietnam’s new religious groups. The research is interdisciplinary in orientation, drawing on sociology and anthropology. It is also comparative in that it bases its argument on a consideration of three distinct new religious groups in Vietnam. The research is also qualitative and ethnographic in that it drew on some of the techniques associated with participant observation during a sustained period of fieldwork amongst the three religious groups.

The concept of religious reconfiguration developed in this book provides a framework for the study of religion in Vietnam which opens the way to further analysis from a comparative perspective. Meanwhile, an emphasis upon religious reinvention which addresses processes of remaking, transforming, legitimating and accommodating can be useful for research into New Religious Movements elsewhere in Asia. A research in the challenges of new religions could act as a catalyst for interdisciplinary studies based on detailed empirical study of religious diversity and of religious freedom by other scholars. It is hoped that this research might help to give a voice to religious minorities that are often the victim of stereotyping, misunderstanding, and punitive treatment.

The book is suitable for post-graduate students and social researchers who are interested in religious revival, religious diversification, State-religion relationships, and State's regulation of new religions.

Dr. Chung Van Hoang is currently a visiting fellow at ISEAS-Yusof Ishak Institute, Singapore. Before taking this position, he was the acting head of the Department for Research on Policy and Law on Religion at the Institute for Religious Studies - Vietnam Academy of Social Sciences. His research interests are state-religion relations, policies and laws on religion, New Religious Movements, Vietnamese Buddhism, and popular religion. His publications in English and Vietnamese are mainly results of his research in these themes. He completed his PhD in Sociology at La Trobe University (Melbourne, Australia) in 2014. Previously, he had MA and BA in Journalism and worked as an editorial staff for the Religious Studies Review at the Institute for Religious Studies in Vietnam since 1999. He was granted full scholarship by the Vietnamese Government for his MA of Journalism at University of South Australia (2004-2005); and full scholarships and research fund by La Trobe University for PhD (2009-2014).