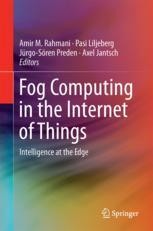 Fog Computing in the Internet of Things

Intelligence at the Edge

Amir. M. Rahmani is currently an EU Marie Curie Global Fellow at University of California Irvine, USA, and TU Wien, Austria. He is also adjunct professor (Docent) in embedded parallel and distributed computing at University of Turku, Finland. He received his Master’s degree from Department of Electrical and Computer Engineering, University of Tehran, Iran, in 2009 and Ph.D. degree from Department of Information Technology, University of Turku, Finland, in 2012. He also received his MBA jointly from Turku School of Economics and European Institute of Innovation & Technology (EIT) ICT Labs, in 2014. He is the author of more than 130 peer-reviewed publications. His research interests span Self-aware Computing, Energy-efficient Many-core Systems, Runtime Resource Management, Healthcare Internet of Things, and Fog Computing.

Pasi Liljeberg is a professor in Department of Future Technologies, University of Turku, Finland. He received the M.Sc. and Ph.D. degrees in Electronics and Information Technology from the University of Turku, Turku, Finland, in 1999 and 2005, respectively. During the period 2007–2009, he held an Academy of Finland researcher position. He is the author of more than 250 peer-reviewed publications, has supervised nine Ph.D. theses. Liljeberg is the leader of the Internet-of-Things for Healthcare (IoT4Health) research group.

Jürgo Preden is the founder and CTO of IoT Technologies, he was also the founder and CTO of Defendec. Jurgo is also active as a senior research scientist and also serving as the head of the Research Laboratory for Proactive Technologies at Tallinn University of Technology. Jurgo's research interests are focused on cyber-physical systems, more specifically the situation awareness of such systems and the computation and communication in ad-hoc sensing systems. Jürgo Preden represents Estonia in NATO RTA System Concepts and Integration panel and he has been involved in the activities of NATO STO task groups.

Axel Jantsch is Professor in Systems-on-Chip, at TU Wien Institute of Computer Technology, in Vienna, Austria. He was a Professor of Electronic System Design with the Royal Institute of Technology, Stockholm, Sweden. He received the Dipl.-Ing and Dr.Tech. degrees from the Vienna University of Technology, Vienna, Austria. His current research interests include VLSI design and synthesis, system-level specification, self-aware computing, Cyber-Physical Systems and Internet of Things, modeling and validation, HW/SW co-design and co-syntheses, reconfigurable computing, and networks-on-chip.
Show all
Reviews

“The book is central to the understanding and advanced study of fog computing. It follows an effective model, based on eight scientific papers of a very high level, and is suitable for readers who want an introduction to the area, according to an organization inspired by the Open Systems Interconnection (OSI) stack.” (Joao Orvalho, Computing Reviews, May, 2018)​