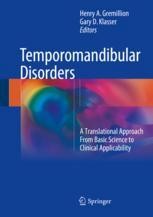 A Translational Approach From Basic Science to Clinical Applicability

This book acquaints the reader with the basic science principles needed in order to understand temporomandibular disorders (TMDs) with a view to helping practitioners manage individuals with TMDs in accordance with the tenets of evidence-based dental medicine. The opening chapters provide essential information on the embryology, anatomy, and physiology of the masticatory system, which includes both myogenous and arthrogenous anatomic structures.

Using this knowledge as a foundation, the reader will be better prepared to grasp the function and, ultimately, the dysfunction of masticatory muscles and the temporomandibular joint, both of which are addressed in detail. The book’s final section is exclusively devoted to management principles and includes a chapter on psychosocial considerations. By following a translational approach to evidence-based practice measures, as outlined in this book, the clinician will be excellently positioned to choose appropriate interventions on a case-specific basis.

Henry A. Gremillion, DDS, MAGD is Dean of the Louisiana State University Health Sciences Center School of Dentistry and E.E. Jeansonne Endowed Professor of Lifelong Learning. His previous positions include P.E. Mahan Endowed Professor in Orofacial Pain, Director of the Parker E. Mahan Facial Pain Center, and Director of the Fellowship in Orofacial Pain, Department of Orthodontics, University of Florida College of Dentistry. He has served as Consultant on Temporomandibular Disorders and Orofacial Pain to the United States Army, Navy, and Air Force. From 2010 to 2014 he served on the Council on Dental Accreditation Review Committee on Advanced Education in General Dentistry, and currently serves as a Consultant to the Council on Dental Practice, American Dental Association. Dr. Gremillion has received various honors and awards, including the Academy of General Dentistry’s Thaddeus V. Weclew Award for contributions to the art and science of dentistry (2008), the Dawson Academy Career Service Award (2009), the American Academy of Orofacial Pain Service Award (2010), and the Pierre Fauchard Academy Gold Medal (2015). He has lectured extensively in the U.S. and abroad and has authored or co-authored numerous scientific articles, abstracts, and book chapters. His research interests include temporomandibular disorders, bruxism, and psychosocial aspects of orofacial pain. His major clinical interest is the diagnosis and management of orofacial pain.

Gary D. Klasser, DMD, is an Associate Professor at the Department of Diagnostic Sciences , LSUHSC School of Dentistry, New Orleans, LA. He took up his current position in 2011, having previously been an Assistant Professor at the Department of Oral Medicine and Diagnostic Sciences, University of Illinois at Chicago College of Dentistry, where he was Director/Clinical Chief and Instructor of the Oral Medicine Clinic. Dr. Klasser received his Certificate in Orofacial Pain from the University of Kentucky College of Dentistry in 2004 and the following year undertook a postdoctoral fellowship in Oral Medicine/Oral Oncology at the University of Illinois at Chicago College of Dentistry. In 2014 he served as Chair of the American Dental Education Association’s Special Interest Group in Temporomandibular Disorders and is currently President of the American Academy of Orofacial Pain. He is a member of the editorial board of Advances in Medicine, an associate editor for Quintessence International and is the author of numerous scientific articles in peer-reviewed journals and author or co-author of several book chapters.