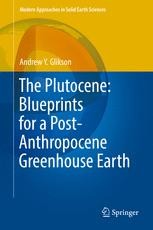 This book presents projections and blueprints of the future geologic period, climate and biosphere, based on our current understanding of the Earth’s history and recent developments in the atmosphere-ocean-cryosphere system.

By the second decade of the 21st century it has become clear that, rather than channel its efforts into protecting its planetary biosphere and living species, Homo sapiens continues to sink its remaining resources into weapons, including nuclear missiles – thus increasing the risk of intentional or accidental spread of radioactive nuclides on land, oceans and atmosphere.

With time, possibility becomes probability, and probability becomes certainty ‒ heralding a transition from the Anthropocene to a new geological period, named here as Plutocene after the element Plutonium. During the Plutocene the biosphere is dominated by elevated temperatures, analogous to the Pliocene (2.6 – 5.3 Ma ago) or the Miocene (5.3 - 23 Ma ago) when mean global temperatures were 2 to 4 degrees Celsius warmer and sea levels 20 to 40 meters higher than pre-industrial levels. High levels of radioactivity will persist for at least 20,000 years and acid oceans will severely limit biological activity to the hardiest species. Atmospheric CO2 higher than 500 ppm with residence time on the order of thousands of years will delay the subsequent glacial cycle.

These factors restrict comparisons of the Plutocene with biosphere conditions during the Miocene and Pliocene periods, partly because the flora and fauna evolved more gradually during these periods, unlike the abrupt climate shift of state during the second half of the 20th century and first part of the 21st century. Following a long lull in biological activity dominated by radiation-resistant organisms, especially Arthropods, a resumption of glacial cycles and decline in radioactivity will lead to the re-emergence of descendants of burrowing mammals and other genera. Depending on the intensity of radioactive pollution, hunter-gatherer humans may survive in northern latitudes, relatively cold high-altitude mountain valleys and elevated volcanic islands. In some areas subsistence farming may be possible. A new cycle will commence.

Andrew Y. Glikson, an Earth and paleo-climate scientist, studied geology at the University of Jerusalem and graduated at the University of Western Australia in 1968. He conducted geological surveys of the oldest geological formations in Australia, South Africa, India and Canada; studied large asteroid impacts, including effects on the atmosphere and oceans of mass extinction of species. Since 2005 he studied the relations between climate and human evolution. He was active in communicating nuclear issues and climate change evidence to the public and parliament through papers, lectures, conferences and presentations.

“The text serves well as an entrance point into a range of topics associated with global warming and nuclear proliferation—including, for example, paleoclimatology and nuclear testing. … This book can help make the reader aware of the factual basis for that realization. Summing Up: Recommended with the caveats above. Upper-division undergraduates through faculty and professionals.” (P. K. Strother, Choice, Vol. 55 (10), June, 2018)